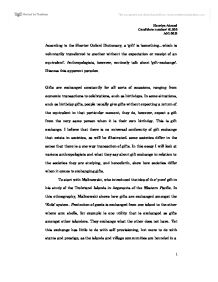 According to the Shorter Oxford Dictionary, a 'gift' is 'something...which is voluntarily transferred to another without the expectation or receipt of an equivalent'. Anthropologists, however, routinely talk about 'gift-exchange'. Discuss.

According to the Shorter Oxford Dictionary, a 'gift' is 'something...which is voluntarily transferred to another without the expectation or receipt of an equivalent'. Anthropologists, however, routinely talk about 'gift-exchange'. Discuss this apparent paradox. Gifts are exchanged constantly for all sorts of occasions, ranging from economic transactions to celebrations, such as birthdays. In some situations, such as birthday gifts, people usually give gifts without expecting a return of the equivalent in that particular moment, they do, however, expect a gift from the very same person when it is their own birthday. This is gift exchange. I believe that there is no universal conformity of gift exchange that exists in societies, as will be illustrated; some societies differ in the sense that there is a one way transaction of gifts. In this essay I will look at various anthropologists and what they say about gift exchange in relation to the societies they are studying, and henceforth, show how societies differ when it comes to exchanging gifts. To start with Malinowski, who introduced the idea of the 'pure' gift in his study of the Trobriand Islands in Argonauts of the Western Pacific. In this ethnography, Malinowski shows how gifts are exchanged amongst the 'Kula' system. ...read more.

He says that 'in theory gifts are voluntary but in fact they are given and repaid under (contractual) obligation' [Mauss, 1970: 1]1. In this book he talks about the spirit of the gift from the donor (whether it is from an individual or group); the Hau, where once a gift is given it has to be received under obligation, and then the receiver has to give to another under obligation, and that gift is then returned to the donor under obligation. It may not necessarily be the same gift, but it is the spirit, the hau of the gift that is reciprocated [Mauss, 1970]. These gifts have the functional aim of 'buying peace' [Mauss, 1970: 14], if a person cannot return the hau s/he loses rank and even status. This is much like the Trobriand Islanders. To compare with Malinowski, Mauss says that in the Trobriands the gift-exchange between spouses/families is a sequence of payments made by the husband to his wife as a kind of salary for sexual intercourse, whereas Malinowski says in Argonauts that it is a 'pure' gift. Evans-Pritchard, in his introduction to The Gift [1970] seems to assume that there are differences in observation between the two scholars because Mauss had a vast knowledge of oceanic languages, therefore able to deduce by comparative study of primitive institutions what Malinowski could not, the anthropologist who was thought of as the 'fieldworker'. ...read more.

From the evidence above the fact that societies do not have just one mode of gift-exchange is evident. In some societies there is reciprocation, whether moral or economic, and in others there is no reciprocation of gifts when it comes to certain aspects of gift giving or receiving, and in the cases shown above to create social dominance. I believe that there is no 'pure' gift that exists in society, as it is disinterested. All gifts are interested, as shown above. Though gift giving is widely thought of as a voluntary act without the expectation of an equivalent, it does, however, make the concept of gift exchange paradoxical. I would like to add a personal experience here to conclude that gift is always interested in some way or another. When coming back from holiday, I wanted to get presents for my closest friends, in order to show my gratitude for their kindness towards me, as they economically provided for me. I felt that I must give them something in return. Thus I realized that there is a moral obligation to reciprocate, though not explicitly mentioned, and if I do not show my gratitude in an equivalently economic way, it would be considered as rude and selfish. But this of course only applies to me, and not society as a whole. Hence, societies vary when it comes to gift-exchange. ...read more.