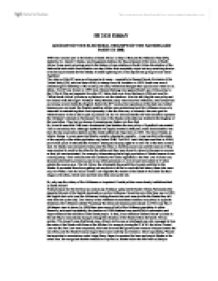 Account for the history of the Nationalsit Party in 1948 South Africa.

HI 2121 ESSAY ACCOUNT OF THE ELECTORAL TRIUMPH OF THE NATIONALIST PARTY IN 1948. 1948 was a crucial year in the history of South Africa. In May of that year the National Party (NP), leaded by Dr. Daniel F. Malan, won the general elections for the parliament of the Union of South Africa. It was surely a turning point in the history of race relations in South Africa: the election of the Nationalist took racial discrimination one step further that completely wiped out any remaining chance of social improvement for the Blacks; it meant legalising it in every aspect and giving it a new name: Apartheid. The victory of the NP came as a big surprise to many...especially to General Smuts, the leader of the United Party (UP), who had been solidly in charge since its formation in 1933. Smuts was sure of maintaining his leadership of the country, but many whites had changed their opinion and voted for Dr. Malan. The NP was formed in 1939 when General Hertzog went against Smut's pro-Allies policy in the II World War and separated from the UP. Malan took over from Hertzog in 1944 and used his "White South Africa" policies as a platform to win the elections. Also his anti-English war policy and his alliance with Havenga's Afrikaner Party attracted many votes from the Afrikaners, who always had and always would dislike the English. ...read more.

So, why was the victory of the Afrikaners so important if racist policies were already institutionalised in South Africa? Firstly because for the first time an exclusively Afrikaner party led the South African Parliament; this signalled the end of the English domination over the Afrikaners. Since the end of the Boer war in 1902, the English had ruled over the Afrikaners limiting them to the rural areas (unlike the Blacks they still were free and quite rich). The victory of the Afrikaners turned these relations completely in opposite directions; the Afrikaners started "invading" the cities and became predominant. In 1910 only 6% of Afrikaners were in towns, by 1960 there were more of half of the Afrikaner population in cities. Secondly, and most importantly, the elections of 1948 shattered any possibility of reformation and improvement of the condition of the Black people. In fact, if one examines General Smuts' policies in the late 40s, he was actually trying to change the situation of the Blacks within the South African society. This doesn't mean that Smuts was a liberal, but he was an intelligent man who managed to fuse the needs of the Blacks with those of the Whites. For example, during the II W.W. the Influx Control Law and the Pass Law were suspended; this both favoured the government because it helped sustain the war effort, and the Blacks because it gave them more mobility and freedom. ...read more.

For example it generated the following acts: the Population and Registration Act (1950) labelled all South Africans by race, making race the single most important arbiter of an individual3; the Groups Area Act (1950); the Bantu Educative Act (1953); the Reservation of Separate Amenities Act (1953); and probably the most influential one, the Race Classification Act (1950). It determined the status in life of each person born in SA. Children of different races were forced to attend different schools; certain jobs were reserved for whites only. There were also the Prohibition of Mixed Marriages Act (1949) and the Immorality Act that followed soon after that made sexual relations between white and non-whites illegal. Therefore, the election of the extremist right wing party in 1948 gave way to a series of transformations in the South African society, economy, politics, culture and even education schemes that formed the base upon which the politics of Apartheid would rest during the 50s, 50s, 70s and 80s. This obviously created a totally unjust society that saw the Afrikaners at the top, followed by the English speaking Whites, then the Coloured, and at the bottom the Blacks and Indians. This system was enforced with the use of the police during the decades to prevent social revolution and to avoid changes in the social structure. Maybe if the United Party had remained in power thing would have slowly changed; it cannot be said for certain but I'm sure there would have been improvements in the Black's social conditions. ...read more.