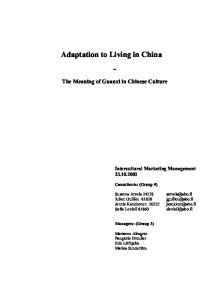 Adaptation to Living in China - the meaning of Guanxi in Chinese Culture.

Adaptation to Living in China - The Meaning of Guanxi in Chinese Culture Intercultural Marketing Management 23.10.2003 Consultants: (Group 9) Susanna Arvela 24278 sarvela@abo.fi Julien Guillou 81828 jguillou@abo.fi Jennie Kankkonen 26225 jkankkon@abo.fi Sofia Levieil 81860 slevieil@abo.fi Managers: (Group 3) Marianne Almgren Pangiotis Droulier Erik L�fhjelm Marica Sundstr�m Table of Contents 2. The Origins of Guanxi 2 3. What is guanxi? 4 3.1. Definition and Basic Concepts of Guanxi 4 3.2. Guanxi as a Social Organization: Group versus Individuals 5 3.3. Guanxi in the Cultural Context 5 3.4. How Does it Function: the Rules within Guanxi 6 3.5. How Guanxi Shapes a Very Typical Chinese Way of Doing Business 6 4. How to get Guanxi 6 4.1. Doing business in China as a Western Expatriate 7 4.2. How to Build up Guanxi 7 5. The Necessity of Guanxi 9 5.1. The Benefits of Guanxi 9 5.2. Problems Linked with Guanxi 10 5.3. Future Development 10 6. Conclusion 11 List of references 12 The different sections in the paper were written by: Chapters 1 & 2 - Jennie Chapter 3 - Sofia Chapter 4 - Susanna Chapter 5 - Julien Chapter 6 - Everyone in the group 1. Introduction Doing business in China differs in many ways from doing business in a Western country. One of the biggest differences is relationships and their impact on business. When talking about relationship, business and China you will probably come to think of guanxi, which also is the topic for this essay. Shortly, and maybe somewhat simplified, guanxi means a social network of contacts that includes certain, unwritten rules. Guanxi might seem as a very complicated thing and in fact there is very a lot written on this subject. It might be impossible for a Western person to fully understand the concept of guanxi. But on the other hand, if you want to live or do business in China you must be aware that such a thing exists. ...read more.

Being part of an in-group is the only way to act and this is why maintaining the cohesion is so essential in the guanxi. 3.4. How Does it Function: the Rules within Guanxi The cohesion of the guanxi is based on the notion of "face"16. In fact, people evaluate continuously your behavior, judging if you fit to the rules influenced by Confucianism and Taoism. The exclusion is immediate as soon as you break these rules. And on the other hand, if you are particularly respectful (one of the strongest imperative in guanxi), the others admire you even more, so that your face is reinforced: this recognition from the others forces you to feel even more redeemable to the group. 3.5. How Guanxi Shapes a Very Typical Chinese Way of Doing Business In business life, guanxi "aims at guaranteeing the fidelity of the clients, and encouraging professional contacts (...) between sellers and buyers, furnishers and producers"17. And whereas in Western Countries a good relationship is the final step of a transaction, it is the necessary condition to begin business in China18. As a consequence, doing business with Chinese people takes time because people need to know you before they trust you. As said in China, "Do only talk about serious things after the third cup of tea"19. But once you get guanxi, your suppliers, retailers, banks, and even local government officials can become reliable colleagues20. And this "determines the competitive standing of an organization in the long run" in China21. 4. How to get Guanxi In this part we will discuss guanxi by presenting some aspects that will be important for a manager going to China as an expatriate. To make some comparisons we will discuss the subject from the point of view of an American company. A manager from an American company will meet great differences both in the social culture and the business culture when going as an expatriate to China. ...read more.

regular and detailed auditing systems 4) Know the politics of your partners... 43 5.3. Future Development Important changes may erode in the future the basis of guanxi and by so its importance in doing business in China44. Here are some of the changes: > The economic liberalization in China Since more and more areas will be subject to market mechanisms there will be less connections in the B2G area. Moreover, some local companies do not adapt fast enough to changes and guanxi appears to be both outdated and inadequate45. Finally, information technology can provide information that was only done before through guanxi network. > Changes in the Civil Service The new system will provide "a stricter separation of political and administrative power, and therefore reduces the possibility of discretionary decisions" > The rule of Law 46 China is developing a Western-style system of commercial law and independent judiciary (the rule of law) mostly under the pressure of Western countries and institutions (e.g. WTO). > The new Chinese managers A new type of managers adopting a Western style of management (e.g. MBA's) is "more prone to rely on hard data than on social relationships". 6. Conclusion Guanxi has a long history and it is difficult to discuss it as a separate phenomenon; it is a part of Chinese society. So we have tried to point out the main characteristics of it and see how it shapes the Chinese way of doing business. As for a Westerner, it is important to study the culture and the etiquette. The right kind of behavior and a lot of time and patience will lead to you being part of the guanxi networks. On the other hand, the Chinese society is getting more open and so they are learning to understand the Western way of doing business. But a country cannot overlook 5,000 years of cultural history and so we will conclude that an expatriate going to China has to respect and understand the Chinese values in order not to offend his business partners. Especially he has to find out about Guanxi. ...read more.