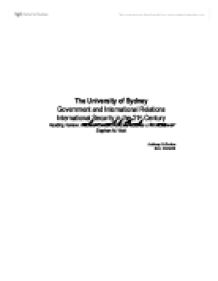 Alliance Formation and the Balance of World Power.

The democratic peace theory states that war is unlikely between democratic nations, which supports Walt's original argument. The subconscious belief of the inferiority of communism and other non-Western cultures such as the Middle East is a flaw in Walt's argument and leads to his claims that under communism, factions conflict, and that any success achieved under such regimes is by chance and unique. Walt describes bribery and penetration as tools used by states in seeking out allies. The notion of bribery implies the provision of assistance from one state to another. The assumption that all states, as a rule, will respond to such tributes and that only their continuation will maintain an alliance is one typical of realism. The very idea of acquiring allies suggests self-interest. Walt states that these "policy instruments" (p 27) facilitate alliance formation rather than create them, and are rather limited in their effect. Marginal Arguments Walt uses the examination of the different factors of alliance formation to put forth a commentary on the actions of the US, both past and future. ...read more.

Although he justifies many of his points with empirical evidence, Walt retains a dismissive disposition in relation to Communism's stability and aggregate power, by making seemingly biased, self-contradictory and unclear claims. Empirical Content - How evidence is used Walt supports each statement he makes with empirical evidence. Furthermore, the evidence he uses is generally taken from 20th century politics and political theory, which supports the relevance in its use, and improves its significance. These examples are clear and concise. On proximate power: "if the British press pay more attention to the increase of Germany's naval power than to a similar movement in Brazil, this is no doubt due to the proximity of the German coasts and the remoteness of Brazil." (p 10) Conclusion Stephen Walt provides a clear understanding of how alliances were formed during the Cold War, and identifies some key features such as balancing and bandwagoning. Although his methodology and logic are clear and simple, he does fall victim to ungrounded arguments at times, when his use of evidence fails to support them. He uses his analysis to compose an effective commentary at the conclusion of the article, on how the US should approach the future. ...read more.