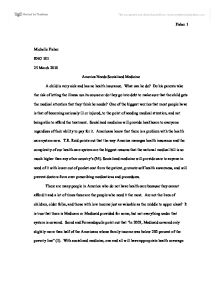 A child is very sick and has no health insurance.  What can he do?  Do his parents take the risk of letting the illness run its course or do they go into debt to make sure that the child gets the medical attention that they think he needs?  One of the biggest worries that most people have is that of becoming seriously ill or injured, to the point of needing medical attention, and not being able to afford the treatment.  Socialized medicine will provide healthcare to everyone regardless of their ability to pay for it.  Americans know that there is a problem with the health care system now.  T.R. Reid points out that the way America manages health insurance and the complexity of our health care system are the biggest reasons that the national medical bill is so much higher than any other country’s (36). Socialized medicine will provide care to anyone in need of it with lower out of pocket cost from the patient, promote self health awareness, and will prevent doctors from over prescribing medications and procedures.

There are many people in America who do not have health care because they cannot afford it and a lot of times these are the people who need it the most.  Are not the lives of children, older folks, and those with low income just as valuable as the middle to upper class?  It is true that there is Medicare or Medicaid provided for some, but not everything under that system is covered.  Sered and Fernandopulle point out that “in 2003, Medicaid covered only slightly more than half of the Americans whose family income was below 200 percent of the poverty line” (1).  With socialized medicine, one and all will have appropriate health coverage with little-to-no out of pocket cost.  Whether one is getting open heart surgery or treating a never ending migraine headache, he doesn’t pay a cent.  Even prescription costs are lower.  Children’s medications are free and generally adult prescriptions are right around ten dollars.  There would be no need to allocate funds to a flexible spending account to cover expected medical costs and avoid taxes on such.  That money could be saved in another account for retirement or the like.

Under universal health care, people end up taking more responsibility for their own health.  Americans could all afford to be a little more careful with their lives and their health and the government could help out with improving our environment in which we live.  Doctor Andrew Weil suggests that the government “enforce sufficient measures to improve the quality of the air we breathe, water we drink, and the soil in which we grow our food…so that the environment supports individuals in taking more responsibility for their well-being” (189). Because there are fewer preventative screenings for diseases, there would be a need to learn to watch and monitor personal health more carefully rather than relying solely on routine exams.  People would start to notice for themselves when there are changes going on in their bodies.  Women would actually have to regularly perform their at home breast exams.  This is a good thing!  The down side to this is if a person does not take it upon himself to keep an eye on his health, a disease could become full blown without the person ever realizing the underlying condition.  Really then, who should know better than each individual what is going on in his body?

Doctors in America are paid per treatment.  Hence, the number of prescriptions prescribed and tests that are ordered dictates the amount of their paychecks.  Bartlet and Steele encourage Americans to take a look at the invoice they are handed after a doctor’s visit.  It is a list filled with all kinds of boxes with names of medical conditions or procedures.  The ones that the doctor’s check off determines how much they earn.  Those five digit codes are their “financial lifeblood” (173).  There is no need for doctors to over-prescribe medications or tests as it has no bearing on their pay under a national health care system.  A lot of times in the states, doctors give prescriptions before the test results even come back.  The pharmacy fills the order before it is even known if the test is positive, which in a lot of cases it is not.  This means that Americans are being over exposed to antibiotics to which their bodies eventually develop an immunity or resistance.  In socialized medicine, doctors are paid by the number of patients they see.  The downside to this system is that the doctors generally spend less time with the patients.  The argument that thus arises is quantity versus quality.  Is quantity now more important than quality care?  Is it possible for mass quantities of patients to be seen and them still receive the attention they need or desire?  According to Senator Tom Daschle, some people worry that covering everyone will lead to long waiting lists and health-care rationing.  The truth is that this is already happening based on income, insurance status, and illness (24).  Wouldn’t waiting a bit longer to see a doctor be a good thing knowing that someone who never had insurance before could now get the care he needed?  The human body is capable of working out illnesses from the body in ways that Americans have never experienced before.  The long wait could allow the body’s antibodies to fight the disease without the need for medication.

Effective health care for every single American substantially outweighs any negative aspect of a national health care plan.  Socialized medicine will promote persons to be proactive with their daily health and wellness.  Money will stay in the pockets of the people who struggle just to make ends meet.  A less medicated America could certainly lead to a more emotionally and physically healthy, balanced people.