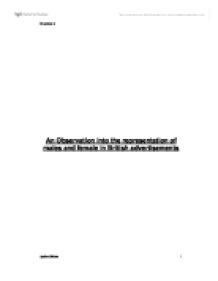 An Observation into the representation of males and female in British advertisements.

An Observation into the representation of males and female in British advertisements Abstract An observational study was conducted to test the hypothesis that there is a marked difference in the way men and women are portrayed in British advertisements. A total number of 52 advertisements were recorded and observed for the following categories: sex of central character; sex of background character; type of argument given by central character; credibility of central character; role; product type and location. There were only slight differences in the way men and women were portrayed. The observations were compared using the chi-square test, however the differences were not significant.CONC Introduction The media plays a vital role in our society, especially in developing people's opinion and their attitudes. It has an intensifying effect on its viewers, which in most cases is children and sets the trend as to how everyday life should really be. Advertisements are also a powerful source of information. One can see that the advertising world "labels" many people. Advertisements emphasise the point that if you buy a particular product charm, comfort and cheerfulness will be yours, whereas this is highly unlikely! The media not only develops people's opinions but advertisements also portray images, which reflect society's attitudes. Murray et al (1972) ...read more.

concluded that this phenomenon is unusually complex, in that the way men and women are shown change during the course of the day. Peter Golding has conducted more recent research into the general election of 2001 at Loughborough University; he reported his study in The Guardian (2001). Golding et al concluded that during the first three weeks of campaigning, women were rarely shown. Their data summary is as follows: * 91% of politicians were male- 9% female * 17% of politicians relatives shown were male- 87% female * 50.5% of celebrities shown were male -49.5% female * 92% of city/business people shown were male- 8% male * 81% of the other professionals shown were male -44% female One can argue that society still constrains women to adapt to certain roles. A role of the housewife or the mother whose only priority is to ensure the house is clean and the meal is at the table. The media creates a deceptive appearance of equality, yet it still continues to support women's traditional role at home. Consequently, the aim of the present study is to replicate previous studies like Manstead & McCulloch (1981) and examine the portrayal of males and females in British television advertisements. Hypothesis There is a marked difference in the way men and women are portrayed in British advertisements. ...read more.

Harris and Stobart (1986) found that the portrayal of men and women changes during the course of the day. Moreover, these differences are much more evident in the evening than the day. Thus, one group may have conducted the observations during the afternoon and another group may have conducted this during the evening, which may have lead to differences. To overcome, this problem, one could set a pilot study where the same criteria for observation could be fixed for all observers. Moreover, there was a limited selection of advertisements. This selection was restricted to two channels. This can be compared to Manstead and McCulloch's (1981) study, where they observed one hundred and seventy advertisements. The time of year can also make a significant difference, as there are different adverts for different times. The present study was conducted in the "January sale season." A period where there are likely to be more shopping orientated advertisements, targeted for women with women as characters. In the present study, 56% of the advertisements were with a female as the only central character. Further experiments could be done to see whether advertisements change in different countries. Do these sex-role stereotypes exist in advertisements all over the world? In addition, one could conduct an experiment where participants are shown a program of gender stereotyping. They could then be shown a series of advertisements to see whether they point out any issues, which they have already seen in the gender stereotyping program. ...read more.