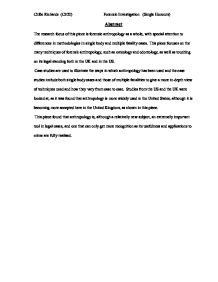 Anthropology and its Uses in Single Body and Mass Fatality Cases

Abstract The research focus of this piece is forensic anthropology as a whole, with special attention to differences in methodologies in single body and multiple fatality cases. This piece focuses on the many techniques of forensic anthropology, such as osteology and odontology, as well as touching on its legal standing both in the UK and in the US. Case studies are used to illustrate the ways in which anthropology has been used and the case studies include both single body cases and those of multiple fatalities to give a more in-depth view of techniques used and how they vary from case to case. Studies from the US and the UK were looked at, as it was found that anthropology is more widely used in the United States, although it is becoming more accepted here in the United Kingdom, as shown in this piece. This piece found that anthropology is, although a relatively new subject, an extremely important tool in legal cases, and one that can only get more recognition as its usefulness and applications to crime are fully realised. Contents Chapter 1: Introduction and a brief history to anthropology Chapter 2: Osteology 2.1 Bone Structure 2.2 Skeletal Structure 2.3 Bone Types Chapter 3: Forensic Anthropology 3.1 The Skull 3.2 Determining the Race of a Victim 3.2.1 Skull Examination 3.2.2 New Methods 3.3 Determining the Sex of a Victim 3.3.1 Skull Examination 3.3.2 Pelvis Examination 3.3.3 Other Bone Examinations to Determine Sex 3.3.4 New Methods 3.4 Determining the Age of a Victim 3.4.1 Pelvis Examination 3.4.2 Other Bone Examinations to Determine Age 3.4.3 New Methods 3.5 Determining Stature Chapter 4: Odontology Chapter 5: Individual Features of the Victim - their Life and Death Story 5.1 Carbon Dating Chapter 6: Mass Fatality Incidents 6.1 Cases 6.2 Morgue Processes Chapter 7: Conclusion - Evaluation of Current Techniques, and the Future of Forensic Anthropology Individual Study - 40 Credits: Anthropology and its Uses in Single Body and Mass Fatality Cases Chapter 1: An Introduction Anthropology is the study of humanity: its cultures, its peoples, their behaviour and what makes humans, human. ...read more.

This is based on a large sample of individuals for whom their legal ages were provided by death certificates. Suchey-Brookes developed their method after realising that Todd's method was based on males, and discovering that females did not age at the same rate as males - some aged faster and others slower. It is important to note that it had long been thought that females could not be aged from the pubic symphysis, as people believed that the trauma of childbirth was bound to have a false and devastating aging effect. However, researchers developed separate standards for female pubic symphyses and proved them to be useful (Gilbert and McKern, 1973; Suchey, 1979; Suchey et al, 1986; Suchey & Brooks, 1990). The Suchey-Brooks six-phase system is as follows (see Fig. 17 for system and Figs. 18 and 19 for diagrams): Figure 17: The Six Phases, Suchey, J.M, (1986) Phase 1 (Ages 15-23): - Completely Ridged Surface: The symphysial face has an undulating surface composed of ridges and furrows, which includes the pubic tubercle. The horizontal ridges are well marked, whilst ventral bevelling may be commencing. Although ossific nodules may occur on the upper extremity, a key feature of this phase is the lack of delimitation for either extremity (upper or lower); there is no lipping and no syhmphysial rim. In the latter stages ossified nodules begin to form as ridges slowly disappear. Phase 2 (Ages 19-35): - Ossified Nodules: The symphysial face may still show ridge development, whilst the lower and upper extremities begin to show early stages of delimitation - with ossific nodules (these nodules are now obvious). The ventral rampart may begin formation as an extension from either or both extremities, and the dorsal plateau is formed. Phase 3 (Ages 22-43): - Ventral Rampart: The symphysial face shows that the lower extremity and ventral rampart are in the process of completion. Fusing ossific nodules may form upper extremity and extend along ventral border and the symphysial face may either be smooth or retain distinct ridges. ...read more.

This means that as more and more people join the anthropological field, more and more advancements can be made as fresh eyes look at old and sometimes outdated techniques. For example, the Suchey-Brookes system replaced the Todd system in the 1970's. Todd's system had been used since the 1920's, but Suchey and Brookes realised that Todd's work was no longer relevant as larger samples had been tested and more information had become available. It is clear that if a greater number of younger people with a passion for justice and truth join the forensic anthropological profession there will be a) more opinions and greater subject knowledge, b) fresh ideas and new and innovative ways to perform the delicate operations of forensic anthropology. It takes years of training to become a fully qualified professional anthropologist, and unfortunately institutional resources are shrinking, meaning that whilst there are a growing number of students yearning to study forensic anthropology, the numbers of people able to provide such services are struggling to cope. Forensic anthropology is a laboratory-based subject, and therefore only so much can be learnt from textbooks and skeleton casts - these students need hands-on training from experts with years of experience. This is a solvable dilemma, but it will take time and money, not to mention new skeleton collections to replace those that have been lost. Overall it would seem that the future of forensic anthropology is a bright one. It is important to note, however, that a reliance on computers could mean that although processes become quicker, the hand-worked quality of diagrams or facial reconstructions, for example, could be lost - and as a result the work could become more generic, which could mean that cases of mistaken identity become more prevalent. As long as there is a continued interest in the field, it seems that budgets for training will become bigger and the field will be consistently improved until it garners the legal and public acceptance and respect that it truly deserves. ...read more.