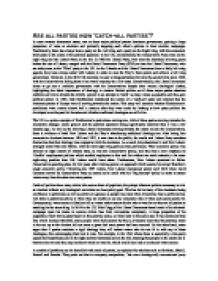 Are all parties now 'catch-all' parties? The UK is a prime example of Kirchheimers predictions coming true, with all three parties moving towards the electorally strategic centre ground.

ARE ALL PARTIES NOW 'CATCH-ALL PARTIES'? In most western democratic states, two or three major political parties dominate government, gaining a large proportion of votes at elections and primarily targeting each other's policies in their election campaigns. Traditionally, there has always been a party on the Left wing and a party on the Right wing, with the occasional third party in the centre of the political spectrum. In the UK, conventionally the Conservative Party were on the right wing and the Labour Party on the left. In 1988 the Liberal Party, who were the dominant left-wing party before the rise of Labour, merged with the Social Democratic Party (SDP) to form the Liberal Democrats, who are today seen as the 'Third' party in the UK. As the Liberals and the Liberal Democrats have a fairly left wing agenda, they have always sided with Labour in order to oust the Tory's from power and achieve a left wing government. However, in the 2010 UK elections we saw a hung parliament for only the second time since 1929, with the Conservatives falling short of an overall majority by a few seats. Controversially, the Liberal Democrats chose to go into a coalition government with the Conservatives despite their various ideological clashes, highlighting the faded importance of ideology in modern British ...read more.

that the promises made in the run up to the election did not mean a great deal once power had been secured. On the other hand, some argue that if parties maintain a rigid ideology they will isolate voters who do not fit in with any of these ideologies, thus encouraging them not to vote. For example, in the USA where there is essentially a two-party system the Republicans are on the right and the Democrats are on the left, meaning that people in the centre are in between the two and thus may not know which to vote for, which would also lead to a reduced voter turnout. A number of problems can be identified with catch-all parties, as explained by scholars such as Grofman, Merrill, Brunell and Koetzle. They point out that in two-party competition, "the more ideologically concentrated party may be advantaged in that its party median may be closer to the overall median voter than that of the more dispersed party" (Grofman et. al. 1999). They argue that often at party primaries, candidates are selected that are close to the party median and that in a general election voters often choose between two candidates with widely divergent ideologies. ...read more.

In looking at European politics today with focus on the UK, this essay concludes that Kirchheimer's catch-all thesis was correct. It is clear that political parties are gradually merging towards the middle ground of the political spectrum as they aim to seek the median voter. In the 2010 UK General Election it was evident that the Labour Party and the Conservative Party no longer have harshly contrasting policies and that voters have thus become more interested in personality of the leadership. However, it is clear that there are many issues with catch-all parties and the problems outlined above can be seen in UK politics today; parties have various ideological branches which may compete with each other, making it difficult to see a clear overall view without looking at the view of the leadership. However, it is clear that to a certain extent political parties are only 'catch-all' parties come election time and when in opposition. When the Conservative-Liberal coalition in the UK secured fixed term parliament for five years they didn't hesitate in breaking some of their pre-election promises as they no longer needed the support of the majority of the country. Although this may harm them in the next general elections, it is entirely possible that by then they will have a new leader with a new personality, thus making them a brand new party in the eyes of the electorate. ...read more.