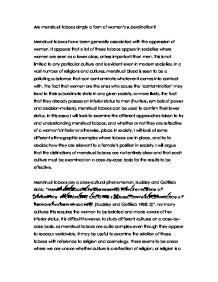 Are menstrual taboos simply a form of womens subordination?

Are menstrual taboos simply a form of women's subordination? Menstrual taboos have been generally associated with the oppression of women. It appears that a lot of these taboos appear in societies where women are seen as a lower class, or less important than men. This is not limited to any particular culture and is evident even in modern societies. In a vast number of religions and cultures, menstrual blood is seen to be a polluting substance that can contaminate whatever it comes into contact with. The fact that women are the ones who cause the 'contamination' may lead to their subordinate state in any given society, or more likely, the fact that they already possess an inferior status to men (hunters, symbols of power and decision-makers), menstrual taboos can be used to confirm their lower status. In this essay I will look to examine the different approaches taken to try and understanding menstrual taboos, and whether or not they are reflective of a woman's inferior or otherwise, place in society. I will look at some different ethnographic examples where taboos are in place, and try to decide how they are relevant to a female's position in society. I will argue that the distinctions of menstrual taboos are not entirely clear and that each culture must be examined on a case-by-case basis for the results to be effective. ...read more.

A menstruating woman endangers the success of rituals by her presence. (La Fontaine 1972: 164)". It is also apparent in this particular tribe that a menstruating woman must not come into contact with food, a similarity shared with the Mehinaku tribes mentioned above. Many anthropologists have fixated upon the idea of menstrual taboos being universally oppressive towards women. So in a lot of ethnographic studies these findings have become truisms in popular culture. Paula Weideger says "generally, the object of a taboo may be a source of good or evil, but in the case of menstrual blood the ascriptions are almost universally evil. (Weideger 1977: 89)". Studies by such people as Weideger have been prominent in popular imagination, and like so much else in popular wisdom, they are only partially true and quite simplistic. So it is difficult to effectively define what a 'menstrual taboo' really is because the meanings of such can be quite different, even opposite in their nature and meanings. For some women these 'menstrual taboos' may in fact be beneficial to them, as it allows them time away from society and able to converse with other women, which is not necessarily a bad thing. So in some cultures, rather than subordinating women to men fearful of them and their 'contamination', it provides women with means of ensuring their own autonomy, influence, and social control. ...read more.

is frightening to a person who has intense castration anxiety. (Stephens 1962: 93)". He therefore thought that if a society had stronger menstrual taboos, then that society possessed a stronger sense of castration anxiety. This seems like quite a controversial claim that he admits is untestable, due to it being unconscious or subconscious in nature. Stephens however, still tried to gather evidence for his theory, looking for correlations between taboos and strict paternal authority, maternal seduction of sons and strong punishment for masturbation. His statistics however, are quite weak in nature and are more suggestive rather than conclusive. I do not believe Stephen's case to be a strong one, as it seems to suggest that menstrual taboos have been created purely for the benefit of males, and that men write the cultural scripts and women simply have to be subordinate and follow the rules. So, women in varying cultures and societies do seem to share the cross-cultural occurrence of menstrual taboos. However, not all of these are necessarily based on the oppression of women. In some cases the separation of women can be liberating for them and allow them time away with social support from their female peers. There have been flaws in the examinations of such taboos that throw together all such things under one umbrella. These phenomena should be studied independently across different cultures and religions to provide useful information for anthropologists. ...read more.