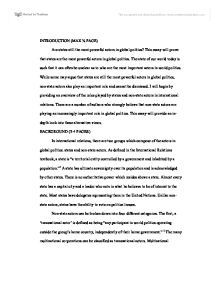 Are states still the most powerful actors in global politics?

Compared to states, NGOs are not confined by public opinion or the desire to keep peace with allied states. NGOs have been recognized as being important in the progression towards a cleaner global environment, the quick relief in war zones, and the struggle towards democracy. The large number of NGOs in attendance at the 1992 United Nations Conference on Environment and Development demonstrates their desire to be included as rightful participants in environmental management.7 The 1980s saw the emergence of NGOs as important figure in world elections. According to Vikram Chand in Beyond UN Subcontracting, NGOs were the first to become involved in election monitoring (P 160). The monitoring of elections helped to provide democratic elections in countries where the leaders are often oppressive. From 1986 to 1989, election monitors played important roles in the transitional elections in the Philippines, Chile, Panama, Nicaragua, and Haiti.8 It is undeniable that NGOs play an important role in global politics. Through the United Nations, non-governmental organizations have a legitimate place within the political system. In The Conscience of the World, Peter Willets summarizes two of the benefits NGOs receive in being a part of the UN (43). In practice, recognized NGOs have access to all UN documents which have been officially circulated. NGOs are also given security passes which provide access into all the buildings used by diplomats. ...read more.