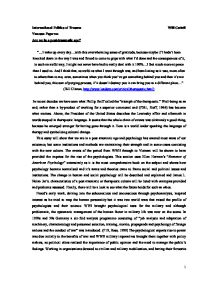 Are we in a post-traumatic age?

International Politics of Trauma Will Cattell Vanessa Pupavac Are we in a post-traumatic age? "...I wake up every day...with this overwhelming sense of gratitude, because maybe if I hadn't been knocked down in the way I was and forced to come to grips with what I'd done and the consequences of it, in such an awful way, I might not never have had to really deal with it 100%...I feel much more at peace than I used to. And I think that, as awful as what I went through was, and humiliating as it was, more often to others than to me, even, sometimes when you think you've got something behind you and then it's not behind you, this sort of purging process, if it doesn't destroy you it can bring you to a different place..." (Bill Clinton, http://www.leaderu.com/critical/therapeutic.html) In recent decades we have seen what Phillip Reiff called the "triumph of the therapeutic." Well-being as an end, rather than a by-product of working for a superior communal end (P261, Rieff, 1966) has become what matters. Above, the President of the United States describes the Lewinsky affair and aftermath in words steeped in therapeutic language. It seems that the whole chain of events was ultimately a good thing, because he emerged stronger for having gone through it. Here is a world leader speaking the language of therapy and symbolising cultural change. This essay will show that we are in a post-traumatic age and psychology has entered most areas of our existence, but some institutions and methods are maintaining their strength and in some cases coexisting with the new culture. The events of the period from WWII through to Vietnam will be shown to have provided the impetus for the rise of the psychologists. This section uses Ellen Herman's "Romance of American Psychology" extensively as it is the most comprehensive book on the subject and shows how psychology became normalised and it's terms and theories came to frame social and political issues and institutions. ...read more.

(P21, Lasch, 1979) "The narcissist's pseudo-insight into his own condition, usually expressed in psychiatric clich�s serves him as a means of deflecting criticism and disclaiming responsibility for his own actions", Lasch terms this the 'Void Within' as life is no longer reflected in his own mind, shoring up a faltering sense of self. (PP19-21, Lasch, 1979) The trouble with the consciousness movement is it's provision of self-defeating solutions; "Arising out of a pervasive dissatisfaction with the quality of personal relations, it advises people not to make too large an investment in love and friendship, to avoid excessive dependence on others and to live in the moment - the very conditions that created the crisis of personal relations in the first place." (P27, Lasch, 1979) Kirby Farrell describes post-traumatic mood as part of post-traumatic culture. With the mood a straightforward response to recent history, the catastrophes of mid century; the great depression and WWII. This combined with the new obsessive awareness has left people shaken and it shows in their thinking about the world; a collective experience of historical shock. (PP2-5, Farrell, 1998) From the beginning, the idea of trauma neurosis has been combined with concerns of compensation both legal and therapeutic and in this sense, trauma is a radical form of terror management. (P7, Farrell, 1998) But self-enhancement in the twentieth century has made traumas such as poverty, failure and death harder to handle. Combined with the amplifying nature of the mass media means neuroses can spread dramatically. "One factor that makes this period so traumatic is that since WWII people have expected that their lives...would steadily improve." (P29, Farrell, 1998) Without improvement or recompense there is increased disillusionment with a therapeutic society that fails to empathise or assist in this trauma. The evidence up to this point leads to a world in a post-traumatic age, but what are the characteristics of this and how are they evident? ...read more.

It is a form of identity that appears to suit the individuated temper of our times." (P226, Furedi in Nolan Jnr, 2002) These characteristics combine to form a system of meaning that's right for the times; "the therapeutic ethos - with the victim pathologies of the emotivist self interpreted for us by the priestly practitioners of the therapeutic vocations - offers itself as a replacement to traditional moral codes and symbols, worn out by the effects of modernisation." (p18, Nolan Jnr., 1998) It is evident that the therapeutic ethos has certainly infused itself well into the major institutions of the American state but there is a concomitant presence of utilitarian and therapeutic rationales for justifying state programmes. (P280, Nolan Jnr., 1998) An example of this conflation exists in civil case law, where psychologists and economists have an objective system of monetary value for 'loss of enjoyment of life.' There is also the case of tort and state workers' compensation reform where the driving force against the awards for emotional and other intangible injuries was economics. (PP283-4, Nolan Jnr, 1998) The utilitarian aims to control and recreate our natural world, and the therapeutic aims to control and recreate our inner psyches so both provide the equipment to create and recreate ourselves. So although the therapeutic and utilitarian ideals on the surface may appear contradictory, in actuality they jointly endorse the belief in human limitless and represent the major languages of legitimisation used by the state to justify itself in a contemporary context. (PP285-6, Nolan Jnr., 1998) This age is markedly one with post-traumatic or therapeutic values and characteristics but there has not been a complete break from a previous order. The state and other societal institutions are still fundamentally modern and still function within structural parameters established by the process of modernity. However the source of legitimisation has changed. There is still evidence of utilitarian ideals guiding decision making, but it is the therapeutic language and beliefs, which is increasingly the legitimisation and justification. ...read more.