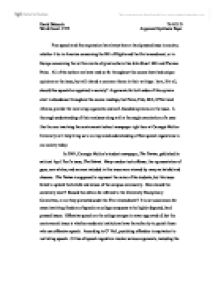 Free speech and free expression has always been a hard pressed issue in society, whether it be in America concerning the Bill of Rights and the first amendment, or in Europe concerning the written works of great authors like John Stuart Mill and Thomas Paine. All of the authors we have read so far throughout this course have had unique opinions on the issue, but still shared a common theme in their writings: how, if at all, should free speech be regulated in society? Arguments for both sides of this opinion exist in abundance throughout the course readings, but Paine, Fish, Mill, O'Neil and Abrams provide the most crisp arguments and well-founded opinions on the issue. A thorough understanding of their analyses along with a thorough examination of a case like the one involving the controversial school newspaper right here at Carnegie Mellon University will help bring us to an improved understanding of free speech regulations in our society today. In 2004, Carnegie Mellon's student newspaper, The Tartan, published its satirical April Fool's issue, The Natrat. Many readers took offense; the representation of gays, non-whites, and women included in this issue were viewed by many as hateful and obscene. ...read more.

Although, like O'Neil, the ACLU would likely agree that the editors of The Natrat should not be punished, the reasoning underlying their argument would be somewhat different than that of O'Neil. While O'Neil believes that hate speech should not be tolerated and would refrain from punishment in order to avoid enacting a speech code, the ACLU would take a more absolutist approach and avoid inflicting punishment to maintain their belief in free speech at all costs. The ACLU holds strongly to the belief that freedom of expression "deserves society's greatest protection", and understands that in order to guarantee freedom of speech for all of society; they are forced to defend all cases on the topic of freedom of speech, even if they do not agree with their actions. The ACLU's argument is law-based, and the prevailing standard today states: "Speech can be suppressed only if it is intended, and likely to produce 'imminent lawless action'. Otherwise, even speech that advocates violence is protected" (ACLU online). They do acknowledge that "freedom of speech does not prevent punishing conduct that intimidates, harasses, or threatens another person, even if words are used" (ACLU online). Within the context of The Natrat, racist speech does exist, but it is neither threatening nor intended to cause violence. ...read more.

Since the content covered by "free speech" is not consistent, Fish insists that "we must consider in every case what is at stake and what are the risks and gains of the alternative course of action" (Fish: 111). He concludes that "right now, the risk of not attending to hate speech is greater than the risks that by regulating it we will deprive ourselves of valuable voices and insights or slide down the slippery slope toward tyranny" (Fish: 115). Although the basis of Fish's argument for contextually-based decisions differs from that of Abrams, his stance in The Natrat case would be in concurrence with Abrams: Fish would likely support a decision to punish the editors, because, according to him, greater risks would face the university if they did nothing to resolve the issue. So, how, if at all, should free speech be regulated in society? The answer is not a concise, one-sided answer by any means, as I hope I have just made evident. However, a thorough understanding of both sides of the issue, along with an understanding of ones own personal values can bring us to our own ultimate truth as to how free speech should be regulated in society. ...read more.