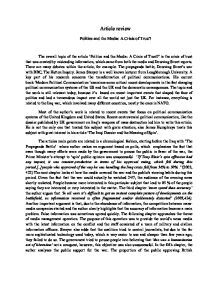 Article review. The overall topic of the article Politics and the Media: A Crisis of Trust? is the crisis of trust that was created by misleading information, which came from both the media and Downing Street reports.

Article review Politics and the Media: A Crisis of Trust? The overall topic of the article 'Politics and the Media: A Crisis of Trust?' is the crisis of trust that was created by misleading information, which came from both the media and Downing Street reports. There are many debates within the article, for example: The propaganda battle; Downing Street's war with BBC; The Hutton Inquiry. James Stanyer is a well known lecturer from Loughborough University. A key part of his research concerns the transformation of political communications. His current book 'Modern Political Communication 'examines some critical recent developments in the fast changing political communication systems of the US and the UK and the democratic consequences. The topic and the work is still relevant today, because it's based on recent important events that shaped the face of politics and had a tremendous impact over all the world not just the UK. For instance, everything is related to the Iraq war, which involved many different countries, mostly the ones in NATO. Most of the author's work is related to recent events that focus on political communication systems of the United Kingdom and United States. ...read more.

Stanyer also adds that the coalition tried to control journalists, but due to the far more sophisticated technology used today, which is way easier to use and cheaper than few years ago, they failed to do so. The government tried to peruse people into believing that 'this was a humanitarian act of liberation' not a conquest, however, this objective was also unsuccessful. In the fifth chapter, the author analyses the public support for the war. The proportion of the public approving British participation in military action rose by 30% at the beginning of March. The author strengthens his affirmation providing pool results obtained by MORI and ICM. Not only the public support for the war increased, but also its satisfaction regarding Tony Blair's job. However his surge in popularity didn't last for long. After the fog of war cleared, an accusation war erupted between BBC and the Downing Street. This 'war' had a lot of negative results; the most important one was Dr Kelly's suicide, which was considered by many news papers a victim of the Downing Street/BBC feud. At the core of the last paragraph stand the outcomes of the Hutton Inquiry, for example: Alastair Campbell, The News-Management System, BBC News Reportage and Tony Blair. ...read more.

All these authors mainly make the same argument as James Stanyer, highlighting once more the political communication system and the crisis of trust that occurred in the United Kingdom. The argument constructed by James Stanyer is mostly clear and very well structured, sustained by credible and relevant information. Each point of view he approaches is carefully and gradually strengthened with evidence, in consequence, leaving no room for further interpretation. Taking into consideration the fact that he based his entire work on the transformation of political communications in advanced industrial democracies, is, therefore, no surprise, the lecturer knows how to make his point and to convince the audience of the verisimilitude of the facts on view. I strongly agree with the writers way of thinking upon the problem above mentholated. To conclude with, the events that occurred in 2003 emphasized an already existing public distrust of government communication. The author's merit resides in the fact that he successfully succeeded in creating an article which treats a large area of material in a relatively small piece of work. This lack of trust is for certain well justified, people can now hardly distinguish between what is true and what has been manipulated. ...read more.