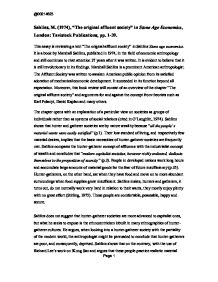 Article Review. This essay is reviewing a text The original affluent society in Sahlins Stone age economics. It is a book by Marshall Sahlins, published in 1974, in the field of economic anthropology and still continues to rivet attention 37 years a

Sahlins, M. (1974), "The original affluent society" in Stone Age Economics, London: Tavistock Publications, pp. 1-39. This essay is reviewing a text "The original affluent society" in Sahlins Stone age economics. It is a book by Marshall Sahlins, published in 1974, in the field of economic anthropology and still continues to rivet attention 37 years after it was written. It is evident to believe that it is still revolutionary in its findings. Marshall Sahlins is a prominent American anthropologist. The Affluent Society was written to awaken American public opinion from its satisfied adoration of mechanical economic development. It succeeded in its function beyond all expectation. Moreover, this book review will consist of an overview of the chapter "The original affluent society" and arguments for and against the concept from theorists such as Karl Polanyi, David Kaplan and many others. The chapter opens with an explanation of a particular view on societies as groups of individuals rather than as systems of social relations (cited in O'Laughlin, 1974). Sahlins shows that hunter and gatherer societies are by nature wealthy because "all the people's material wants were easily satisfied" (p.1). ...read more.

As Gusinde observes, Goods can become dangerously repressive and the more so the longer they are carried around. The goods for hunters-gatherers become burden more than a comfort (p.11, 33). In addition, the author contrasts this to "unique developments of the market economy, to its institutionalisation of scarcity", and quotes Karl Polanyi (1947:115) in saying that our animal reliance upon food has been bared and the exposed panic of hunger is officially allowed to be free. He adds, Karl Polanyi argues that "Our humiliating enslavement to the material, which all human culture is designed to mitigate, was deliberately made more rigorous" (p.28). Our market-industrial economy, he explains, depends on scarcity. The author makes a touching contrast between the hunter and modern industrial-capitalist society by saying that one-third to one-half of humankind are thought to go to bed starving each night. He argues that in olden days this portion must have been a much smaller amount. He adds, at the moment, in the period of the most industrial influence, starvation has become a tradition. In his words "the amount of hunger increases relatively and absolutely with the evolution of culture" (p.36). ...read more.

It is argued that he did not go in to enough depth in explaining the society and is therefore not purely hunter-gatherer. Sahlins can be criticised for failing to provide the evidence for the strong type of argument he stands for. For all its restrictions, nevertheless, Sahlins method of approaching universal and fundamental social themes through the affluent society is a great achievement. The chapter is outstanding and enjoyable. In conclusion, it is evident to believe that Sahlins work lies not only in originality and investigative authority, but also in its capability to inspire essential suggestion, produce controversy and attract attention in the academic world and beyond. Most readers will find Sahlins vision interesting, some will find it emotionally persuasive and yet others will consider its political implications. Therefore, it is evident to believe that there has been much progress in this field since 1970's and the ideas on hunter-gatherer societies are always changing. However, it is not to be forgotten that there are still many such societies in the world and they differ deeply from each other. Ultimately, "The original affluent society" is a call to arms, a predict for the future, and a study of the past all organised into one elegant text. ...read more.