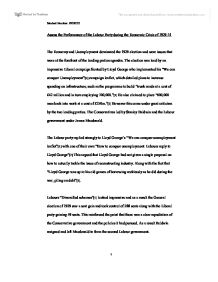 The Economy and Unemployment dominated the 1929 election and were issues that were at the forefront of the leading parties agendas. The election was lead by an impressive Liberal campaign fronted by Lloyd George who implemented his “We can conquer Unemployment”[1] campaign leaflet, which detailed plans to increase spending on infrastructure, such as the programme to build “trunk roads at a cost of £42 million and in turn employing 100,000.”[1] He also claimed to place “600,000 men back into work at a cost of £250m.”[2] However this came under great criticism by the two leading parties. The Conservatives led by Stanley Baldwin and the Labour government under James Macdonald.

Labours “Diversified schemes”[4] looked impressive and as a result the General election of 1929 saw a seat gain and took control of 288 seats along with the Liberal party gaining 59 seats. This reinforced the point that there was a clear repudiation of the Conservative government and the policies it had pursued. As a result Baldwin resigned and left Macdonald to form the second Labour government.

Labour put forward many promises during the electoral campaign most notably the debate arising from unemployment. Labour suggested it could better the conservative and especially the strong Liberal campaign to tackle unemployment. But also to protect British economic interest by aiding exporting businesses and industry.

The first six months of MacDonald’s tenure were perceived to be “very good”[5] this was due to a number of factors including his success in foreign policy and his “outstanding success of his American visit in October 1929”[6]. His reputation was also enhanced by the fact that his Chancellor, Phillip Snowden had defended Britain’s key interests at The Hague over war reparations and trade.

However due to the election results Macdonald was running a minority government and therefore this caused great difficulty in passing policy through the commons. Regardless the widows, orphans and old age contributory bill and the unemployment insurance bill taken in the autumn session managed to pass through with the agreement of the conservatives and liberals. These bills promised to benefit a number of people and as a result Macdonald was seen to be in ascendency even beyond his honeymoon period in government.

This was not the case however for other policies and Macdonald was unable to work well or come to agreements with the opposing parties. Most significantly with the leader of the Liberal party Lloyd George who the Labour party were most aligned with. “In the Labour party there was a massive mistrust of Lloyd George”[7] This was as a result of “broken promises that marked his premiership”[8] and as a result he was regarded as “tricky, unreliable and the last person whom you wanted to depend upon”[9] The inability to work with the Liberals and the Conservatives lead to increasing difficulties for Macdonald in passing legislation and future policies in which we shall discuss.

The critics of the Labour administration during 1929-1931 suggest that Ramsey Macdonald was a key reason to the failings of the labour party. Macdonald could be seen as unlucky as “The Labour government did not compare favourably in terms of competence to other governments of the century, and lacked any ministers of real intellectual flair”.[10] As a government it was seen to fail in times where it faced the sternest challenges.

Macdonald was seen as the most “inspiring orator in the Labour movement” and he was “helped by his magnificent physical presence and a baritone of rare beauty”[11] However it was only in public that he could unburden himself and he became “secretive, suspicious and aloof” this caused a great deal of friction between not only opposition ministers and leaders but also within his own party he was seen and unpopular and an isolationist, preferring to work alone and with little input from his staff around him. His distrust in his own staff can be seen with his relationship with Arthur Henderson, MacDonald’s foreign secretary. Henderson “came to despise Macdonald as a person due to Macdonald mistaking Henderson’s solidness for stupidity” [12]

This lack of unification shown by Macdonald could be seen as one of the large negative implications of his premiership. Not only as this caused a lack of belief within the Labour party and for its voters but also due to the position in Westminster and the fact that Macdonald was controlling a minority government. This applied an even greater precedent on securing his own party members in order to pass policy. There are a number of examples where a lack of party unification caused some of the party’s policy’s to be blocked and rejected in the commons. For example the “Unemployment insurance bill opposition came not from the opposing parties but from Labours own supporters”[13]

Although Macdonald was seen as a “indispensable as a national leader”[14] he had firm beliefs in the running of government. He strongly believed in both political and economic orthodoxy and as a result was reluctant to accept large change,a cautious pragmatist unwilling to think unconventionally, or take risks. This can be seen in the Coal Bill in 1930. The bill which was implemented to increase the working day of workers and to protect pay was controversial with many coal businesses and came under great support from many of the unions in which supported the government. However the bill although passing through the commons in December 1931[15] was heavily amended and diluted and “a different bill altogether” in comparison to the one originally proposed and “insufficiently radical”[16]. This landed the government in a “weak and shaken” position as a result of weak leadership and negotiation between businesses and unions. It can be argued that with stronger leadership from Macdonald and accepting greater change or compromise the Bill could have been pushed through with less compromise and put forward key points that the Labour party wanted to be passed.

As a result of the time taken over the Coal Bill this also stalled many other important bills that would have been necessary to aid the economy. “On 25th June 1930 Macdonald announced that the government would be forced to postpone the Education, consumer’s council, land valuation and the industrial hour’s bill.

These setbacks created a drop in confidence over the government and its ability to act quickly and efficiently enough in order to aid Britain out of the depression it was facing and to tackle the key economic and political problems. In order to assess the Labour government’s performance further beyond the political emphasis it would be key to look at the economic policies and factors and to evaluate the decisions implemented.

Phillip Snowden was appointed Chancellor to the Labour party in 1924. Labour economic thinking was heavily influenced by Snowden, whose main priority was curbing inflation. Snowden believed in economic orthodoxy similar to Macdonald and that public work schemes should reap economic return and he was against the notion of expanding credit. Snowden wrote to the General Council of the TUC in 1927 to express this view that “An expansion of the currency issue must respond to a genuine demand arising out of real purchasing power and not be used to create demand.”[17].

As a result of Snowdens economic beliefs he believed it to be necessary to cut public expenditure in order to cut the deficit.  Snowden proposed a series of cuts, but reduced the cut in unemployment benefit from 20% to 10%, and made up the difference with cuts in defence expenditure.[18] A full list of cuts were introduced in the May report on 31st July 1931[19]. These included the expected cut in unemployment insurance along with “reduction of teacher’s salaries by 20%” and the “reduction in police pay by 12.5%”.[20] These cuts were seen as necessary by Snowden and Labour in order to restore confidence in the pound and to avoid fears that the pound would be vulnerable to inflationary tendencies.

However there was strong opposition to the May report and the implications it may create as a result of cuts in public expenditure. John Maynard Keynes, a British economist expressed radical new views to economic thinking. Keynes believed that deficit financing or counter cyclical policy should be proposed as a method to bring an economy out of depression. Almost to the exact opposite to Snowdens philosophy Keynes believed that by maintaining public expenditure in areas such as unemployment insurance would in turn stimulate aggregate demand and therefore economic gain. This gain could then be used to balance the payments required due to the expansion of credit. “Keynes was one of the few economists brave enough to challenge the implications of the May Report, advocating that the Sinking Fund be suspended, borrowing continues for unemployment insurance and the imposition of a revenue tariff.”

Keynes openly criticised Snowden for his rigidity and wrote an article in the London evening standard "The Budget that Wastes Time"[20] here he accused Snowden of introducing wrong economic models and “speculating on an early revival of trade and prosperity”[21] Keynes model pushed to create greater focus on the domestic market and as a result of increasing markets, create additional demand to evoke the economy’s dormant capacity. Snowden saw this as irresponsible spending and too risky in a time where stability was needed. His economic orthodoxy therefore lead him to the decision of public spending decrease than to use a economically radical Keynesian model.

However the options presented in the May Report caused the Cabinet  to split on the two options available: either introduce tariffs, or make 20% cuts in unemployment benefit. When a final vote was taken by Cabinet there was a split 11:9 with a minority. Due to this split and the acceptance of the opposing parties seeing apolitical gain by doing so, on 24 August MacDonald agreed to form a National Government composed of "men from all parties" with the specific aim of balancing the Budget and restoring confidence.

The formation of a national government between the opposing parties although not efficiently tacking unemployment did help restore confidence. “Its immediate attempts to balance the budget and prevent dumping gave businessmen hope and paved the way for industrial recovery”[22]

MacDonald’s labour party did not remain amicable and as a result of a lack of confidence on 28th September MacDonald was expelled from the Labour party and the Labour party dissolved making way for the greatest electoral victory in English history 556 seats National Governments vs. Labours 52.[23]

To conclude Labours performance during 1929-1931 can only be seen as one which did not provide great positives and in many cases caused great failings. Although Labour found themselves in a situation that could have not been expected this does not account for the fundamental failings of the party. MacDonald’s uninspiring leadership, Snowden’s rigidity, and the inexperience of the Ministers that made them “slaves to departmental views”, and the “intellectual paralysis”[24] of the Labour Government.  In conclusion, “the Labour Party simply did not know what to do.”[25]Macdonald broke with his colleges not over policy but over primary loyalty and as a result saw little backing from his own party members in a time where he needed them to be close by. The real criticism however is not that he helped to form he national government but that under his leadership the Labour government had drifted into a position which left it little choice for manoeuvre.  As a result of poor leadership, lack of ministerial experience and poor policy decisions, this lead to a tarnished view of the Labour party for almost two decades and therefore the Labour government of 1929-1931 can be seen as poor and one without imagination and creativity.