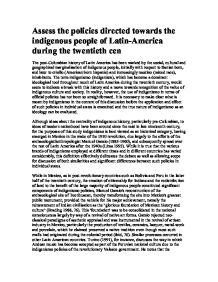 Assess the policies directed towards the indigenous people of Latin-America during the twentieth cen The post-Columbian history of Latin America has been marked by the social, cultural and geographical marginalisation of indigenous people, initially with respect to Iberian born, and later to criollo (American born hispanic) and increasingly mestizo (mixed race), inhabitants. The term indigenismo (indigenism), which has become a dominant ideological tool throughout much of Latin America during the twentieth century, would seem to indicate a break with this history and a move towards recognition of the value of indigenous culture and society. In reality, however, the use of indigenismo in terms of official policies has not been so straightforward. It is necessary to make clear what is meant by indigenismo in the context of this discussion before the application and effect of such policies in individual states is examined and the true nature of indigenismo as an ideology can be evaluated. Although ideas about the centrality of indigenous history, particularly pre-Columbian, to ideas of modern nationhood have been around since the mid to late nineteenth century, for the purposes of this study indigenismo is best viewed as an historical category, having emerged in Mexico in the wake of the 1910 revolution, due largely to the efforts of the archaeologist/anthropologist Manuel Gamio (1883-1960), and subsequently spread over the rest of Latin America after the 1940s (Lima 1993). While it is true that the various brands of indigenismo employed at different times and in different countries has varied considerably, this definition effectively delineates the debate as well as allowing scope for discussion of both similarities and significant differences between such policies in individual states. ...read more.

According to him, "regardless of the reform's failings and underlying agendas, Velasco was, and still is, viewed by many peasants as a liberator and ally against the landowners" (p.273). Likewise Stroebele Gregor (1990) says of post-revolutionary Bolivia, "the achievements of the revolution- citizenship for former Indians and agrarian reform- and the populism of the MNR bound the peasants to this party and the state" (p.218). It is clear, then, that while indigenismo policies have sought to ensure the absorption of indigenous identity by all citizens of a given nation (Malverde and Canessa 1995), and to improve the living conditions of indigenous people, they have done so as part of a drive to homogenize the populace. The implications of this fact in terms of race, culture and ethnicity must now be discussed. While 'racial approximation' was stated to be one of the foundations of Manuel Gamio's romantic Mexican nationalism, race in itself has tended not to be an explicit part of indigenismo either in Mexico or elsewhere in Latin America. Gamio, indeed, subscribed to the view of the anthropologist Franz Boas that, contrary to Social Darwinist views much favoured at the time, race had no use as an analytical category and was best replaced by the concept of culture. The apparent backwardness of contemporary Indians could therefore be "attributed to their poor diet, their lack of education, their material poverty, and their isolation from the stimulus of national life" (Brading 1988, 79) and was thus remediable by integration into the Mexican nation. Inasmuch as the philosophy of indigenismo does not explicitly entail racial discrimination, however, it undoubtedly does entail cultural discrimination. This is justified by the assertion of the cultural superiority of the European invaders and the belief that, while the indigenous people were ...read more.

that "education can be read as 'bolivianisation'". Likewise, in Ecuador, while "those who have received a formal education have a sense of themselves as Ecuadorians which is firmly rooted in a significant pre-Columbian past" (Stutzman 1981, p.58), the present day culture which they are prepared for is essentially European (ibid). Aronowitz (1987) neatly sums up the reality of nationalistic school systems within Latin American countries, stating that, through education, "a notion of geographical and cultural territoriality is constructed in a hierarchy of domination and subordination marked by a centre and margin legitimated through the civilising knowledge/power of a privileged Eurocentric culture" (p.112). While policies of indigenismo may vary considerably throughout Latin America, the similarities are far more profound; all varieties are characterised by an emphasis on nationalism and integration into an essentially hispanic, European culture. While citizenship for indigenous people and land reform have meant improvements in the material conditions of rural Indians, they have also served to bond these people to the state. Furthermore, the glorification of a largely invented Indian past based around mestizaje as the embodiment of national identity and consolidated by the perfunctory acceptance of indigenous art-forms has served both to obscure and to facilitate the destruction of contemporary Indian ways of life. This destruction has been compounded by the nationalist education of the indigenous rural youth. While the nature of policies aimed at indigenous Latin Americans may well change in the future, particularly with the increased ethnic awareness of such people (see for instance Rappaport 1992), in the light of the evidence it is fair to say that indigenismo movements in Latin America have, up to now, always been much more about creating a national, mestizo, identity than about indigenous people. ...read more.