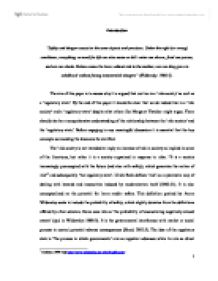 Assess why it is argued that we live in a risk society as well as a regulatory state.

Introduction "Safety and danger coexist in the same objects and practices. Under the right (or wrong) conditions, everything we need for life can also maim or kill: water can drown, food can poison, and air can choke. Babies cannot be born without risk to the mother, nor can they grow to adulthood without facing innumerable dangers" (Wildavsky: 1988:5). The aim of this paper is to assess why it is argued that we live in a 'risk society' as well as a 'regulatory state'. By the end of this paper it should be clear that we do indeed live in a 'risk society' and a 'regulatory state' despite what others like Margaret Thatcher might argue. There should also be a comprehensive understanding of the relationship between the 'risk society' and the 'regulatory state'. Before engaging in any meaningful discussion it is essential that the key concepts surrounding the discourse be clarified. The 'risk society is not intended to imply an increase of risk in society as implied in some of the literatures, but rather it is a society organized in response to risks. "It is a society increasingly preoccupied with the future (and also with safety), which generates the notion of risk"1 and subsequently 'the regulatory state'. Ulrich Beck defines 'risk' as a systematic way of dealing with hazards and insecurities induced by modernization itself (1992:21). It is also conceptualized as the potential for harm and/or safety. This definition posited by Aaron Wildavsky seeks to include the probability of safety, which slightly deviates from the definitions offered by other scholars. Rowe sees risk as 'the probability of encountering negatively-valued events' (qtd. in Wildavsky: 1998:3). It is the governmental interference with market or social process to control potential adverse consequences (Hood: 2001:3). The idea of the regulatory state is "the process in which governments' role as regulator advances while its role as direct employer or property owner may decline through privatization and bureaucratic downsizing" (ibid. ...read more.

Children especially are no longer speared from the wiles of the guns, knives and machete criminals. The Jamaican experience echoes the outrage of the risk society. The rape and murder of six year old Shanique Wilson; the screams of a burning nine year old along with the rest of her family trapped in her flaming home, had to be ignored as gunmen open fire on her potential rescuers preventing them from doing so until it was too late; the brutal slaying of three siblings in Kilancholly district; the report of a teenager dragged from class and gang raped are just a few of the horrific realities that have moved the Jamaican government to seriously contemplate warranting the death penalty in response to the atrocities of the risk society. Dr. Jessica Byron recounts a visit to the St. Augustine campus in Trinidad and Tobago where the incidence of kidnapping has become rampant; she recalls a strange convergence of university students (Indians in particular) in the yard waiting to be picked up by parents instead of heading home on their own like the typical university student. Parents fear losing their children to the spiraling incidence of kidnapping and insisted on picking them up after school. This feature is a product of the risk society where children have become a prime target. For many persons the events of 9/11 have been indelibly marked in our minds forever, as on that fateful day millions of viewers across the world glued to their television sets witnessed the murder of thousands of innocent victims as terrorists hijacked and crashed two commercial airlines into the Twin Towers of the World Trade Center, and a third close to the Pentagon. Even more recently the London train bombings which also claimed thousands of lives - these events have come to characterize the notion of a risk society. We live in a risk society because risks transcends national borders and efforts to deal with them requires international cooperation which has led to the creation ...read more.

was created in response to air pollution and other forms of environmental hazards in an effort to reduce it as much as possible. One of its primary goals is "to reduce dangerous substances in the atmosphere to a level that will not adversely affect human health" (Sunstein: 1990:414). We live in a regulatory state because even markets are controlled through monetary or fiscal policies. The regulatory state is characterized by "states which assume an overall monitoring role which emphasizes procedural values and which permits and encourages private interest to police each other, where centres maintain strategic control and inspection" (Power: 1997:53). The notion of a risk regulatory state describes a response to risk and regulatory failure through generalized systems of control. The ODPEM is institutional machinery used to handle natural risk and disaster hazards in the regulatory state. "For some hazards governments adopt heavy-duty anticipative and intrusive regulatory arrangements of the draconian measures taken by early modern states to control plague"- Michael Foucault 1997:195-200 in his work Discipline and Punishment. Evidence of this anticipative and intrusive risk regulation include the ill- fated attempt to immunize every man, woman and child in response to a number of diseases. Conclusion In concluding I reaffirm the view that we do exist in a 'risk society' as well as a 'regulatory state', not so much for the number of risks with which we must deal with but largely as a result of how this exposure has come to define how we perceive and prepare for risk. The two notions 'risk society' and 'regulatory state' are mutually reinforcing given that risk and safety are the primary propellers for the regulatory state. It is as a result of the acceptability of a risk society that has given rise to a regulatory state aimed at creating risk management systems for dealing with and preventing that which can be prevented. Humans are constantly preparing for potential hazards because of their susceptibility to such risks, hence the reason for the number of insurance companies and other institutions created to ward off the adverse effects of the 'risk society'. ...read more.