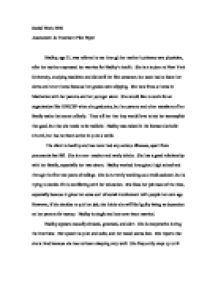 Social Work 3930 Assessment & Treatment Plan Paper Hadley, age 21, was referred to me through her mother's primary care physician, after her mother expressed her worries for Hadley's health. She is a student at New York University, studying medicine and did well her first semester, but soon had to leave her dorm and return home because her grades were slipping. She now lives at home in Manhattan with her parents and her younger sister. She would like to work for an organization like UNICEF when she graduates, but her parents and other members of her family make that seem unlikely. They tell her that they would love to see her accomplish that goal, but that she needs to be realistic. Hadley was raised in the Roman Catholic Church, but has not been active in quite a while. The client is healthy and has never had any serious illnesses, apart from pneumonia last fall. She is a non- smoker and rarely drinks. She has a good relationship with her family, especially her two sisters. Hadley worked throughout high school and through the first two years of college. She is currently working as a retail assistant, but is trying to decide if it is conflicting with her education. ...read more.

The dishonesty from her parents leaves the client ashamed. She doesn't like to lie to them, but she does not know how to tell them what is wrong. Hadley feels that she should be further along in school and is embarrassed about living with her parents. Her weight gain and lack of self-esteem have made her lose or avoid contact with many friends. The client began to notice a change in her behavior three years ago, when she first started college, but never received help because the feelings "went away." Since she has moved back home two years ago, Hadley noticed the depression gradually getting worse. Hadley is confused as to what brought on her depression, but knows that it can be biological and even genetic. In her mind, depression occurs when a traumatic event has happened. She states that nothing really happened to her, other than suddenly losing her grandmother in high school, but she pushes that aside and says she knows that "it shouldn't be a big deal." The client seems to be used to belittling her feelings and putting herself down, like they should not matter. She says she knows "there are so many other people with 'real problems' and they get through them" and she feels bad for letting her situation have such an effect on her. ...read more.

Hadley is open to speaking with a psychiatrist about the possibility of being out on medication to improve her mood and discuss some coping techniques for the future. Hadley and I discussed a set of goals for her to work on before our next session, so she will have two to three weeks to either begin them or get information on them, depending on the goal. * Hadley will work on her health: > She will plan on joining the exercise class that her friend invited her to. > She will begin planning meals with her family so they don't have to eat so late. > She will begin a food and exercise journal > She will make a list of positive attributes about herself. * Hadley will work on being more honest with her family: > She will tell her parents the truth about her missed classes. > In the future, if she has a problem or is feeling depressed, she will try to be more honest about it. She needs to realize that her family cares about her problems, no matter how minor she thinks they are. * Hadley will work on being more socially active: > She will rejoin her youth group at church. > She will get information on how to join the church choir. ...read more.

Some interesting initial recordings here regarding this client who appears to be suffering with depression. I would suggest that it is made clear which are her thoughts and which are the assessor's. The goals could be a bit more focused including info on the exact things it is agreed that she will do.