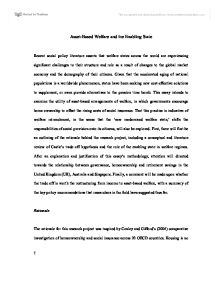 Asset Based Welfare and the Enabling State. This essay intends to examine the utility of asset-based arrangements of welfare, in which governments encourage home ownership to offset the rising costs of social insurance. That this practise is indicative o

Asset-Based Welfare and the Enabling State Recent social policy literature asserts that welfare states across the world are experiencing significant challenges to their structure and role as a result of changes to the global market economy and the demography of their citizens. Given that the accelerated aging of national populations is a worldwide phenomenon, states have been seeking new cost-effective solutions to supplement, or even provide alternatives to the pension time bomb. This essay intends to examine the utility of asset-based arrangements of welfare, in which governments encourage home ownership to offset the rising costs of social insurance. That this practise is indicative of welfare retrenchment, in the sense that the 'new modernised welfare state,' shifts the responsibilities of social provision onto its citizens, will also be explored. First, there will first be an outlining of the rationale behind the research project, including a conceptual and literature review of Castle's trade off hypothesis and the role of the enabling state in welfare regimes. After an explanation and justification of this essay's methodology, attention will directed towards the relationship between governance, homeownership and retirement savings in the United Kingdom (UK), Australia and Singapore. Finally, a comment will be made upon whether the trade off is worth the restructuring from income to asset-based welfare, with a summary of the key policy recommendations that researchers in the field have suggested thus far. Rationale The rationale for this research project was inspired by Conley and Gifford's (2006) comparative investigation of homeownership and social insurance across 20 OECD countries. Housing is no longer being marginalized as a wobbly pillar (Torgensen, 1987) of comparative literature, but is cited as having everything to do with the sustainability of existing public pension provision arrangements in a global market economy (Conley and Gifford 2006, p.58). Castles (1998, p.8) emphasized the unique part that housing had to play in mitigating dependency on the state at the later stages of the life course, as home ownership enables individuals to save on the outgoings of rent and thus get by on smaller pensions. ...read more.

Taking advantage of the fact that its populace is relatively small and its government bureaucracy is well-paid and uncorrupt, the Singaporean city-state has favoured extremely centralised intervention when crafting housing policy (Phang 2007). Originally established as a colonially established retirement fund for Singapore's working population in 1955, the Central Provident Fund (CPF) began to finance housing purchases in 1968 following the government's compulsory acquisition of privately owned land (Phang 2007, p.22). Like the UK and Australia, the state marginalized the rental housing market as tenancy contracts were stipulated by the government's Housing Development Board (HDB) to last a maximum of two years and CPF savings were prohibited from being withdrawn to pay rent, only mortgages (Resiman 2007, p.168). Integral to the government's asset based approach was the solvency of the HDB (Chua 2003, p.769), which receives generous annual subsidies in the realm of S$778 million during the FY2006-2007 (OECDa 2009). Thus, 'public housing' signifies more than just the provision of a shelter for low income earners, but is an important status symbol as well as a personal investment for retirement (Addae-Dapaah, 1999). Australian politicians have approached the prospect of home ownership like their UK counterparts, by espousing the need for individuals to address their fiscal needs in retirement. The dominance of Australian political system by right wing political hegemony in the post-war period also resulted in the embedding of neoliberal values within the society (Aspalter 2001, p.5) which complemented and consolidated upon the state's long entrenched corporatist 'workfare' orientation towards public provision (Castles 1998). Prime Minister Menzies was the first politician to elevate the importance of creating a nation of homeowners (Wood et. al. 2010, p.19). This has consequently produced a dualist housing system, (Kemeny 1995) similar to the one produced in the UK after the Right to Buy initiatives, in which the public housing sector is considerably smaller in comparison to the private market, comprising only 5% of dwellings in 2005 (Wood et. ...read more.

Ultimately, the trade off effect in which asset based welfare becomes a substitute for a public pension scheme is an unviable proposition (Bradbury & Yates 2010). More likely and less risky is the use of asset wealth to complement existing pension arrangements. Achieving an asset-based social policy that is also redistributive and equitable is possible according to Brody and McNess (2009, p.9), who recommend that the Australian government reform superannuation so that a proportion of the funds can be available for withdrawal for mid-life purchases, the most important of these being a house. This recommendation bears striking similarity to current role of the CPF and confirms Phang's (2007, p.44) assertion that policymakers could look to East Asian systems of welfare capitalism for transferable ideas on how best to promote home ownership without sacrificing the prosperity and security of its citizens. The transition towards asset based welfare, facilitated more easily in liberal regimes, has occurred in tandem with the redefinition of the state from provider to enabler and in light of the need to make provisions for the rising number of elderly across the world. While the political rhetoric of empowering citizens to fend for themselves may be shared, the institutionalization of home ownership promotion however has not witnessed retreating of government efforts in the UK, Australia and Singapore but the manifestation of state intervention for the supply and demand of public-private housing arrangements by other more regulatory and administrative means. Of more concern are the implications of these arrangements for the well being and security of the elderly, particularly those in the public housing or rental sectors, who were found to be doubly disadvantaged in societies where asset wealth is encouraged. Though social policy analysts advise against the complete substitution of asset based approaches for cash benefit schemes given the scheme's inherent unsustainability, the promotion of home ownership is a particularly cost effective response to the pressures of being solvent and competitive in the global market economy. ...read more.