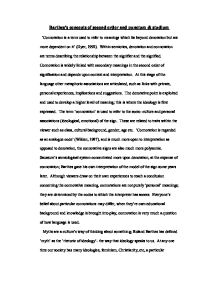 Barthes's concepts of second order and punctum & studium 'Connotation is a term used to refer to meanings which lie beyond denotation but are more dependent on it' (Dyer, 1992). Within semiotics, denotation and connotation are terms describing the relationship between the signifier and the signified. Connotation is widely linked with secondary meanings in the second order of signification and depends upon context and interpretation. At this stage of the language other metaphoric associations are articulated, such as links with private, personal experiences, implications and suggestions. The denotative point is exploited and used to develop a higher level of meaning; this is where the ideology is first expressed. The term 'connotation' is used to refer to the socio- culture and personal associations (ideological, emotional) of the sign. These are related to traits within the viewer such as class, cultural background, gender, age etc. 'Connotation is regarded as an analogue code' (Wilden, 1987), and is much more open to interpretation as opposed to denotation, the connotative signs are also much more polysemic. Saussure's semiological system concentrated more upon denotation, at the expense of connotation; Barthes gave his own interpretation of the model of the sign some years later. Although viewers draw on their own experiences to reach a conclusion concerning the connotative meaning, connotations are not purely 'personal' meanings; they are determined by the codes to which the interpreter has access. ...read more.

This particular photograph is an open text, open to different views and interpretations. Regardless of a spectators background, some connotations of the photograph are universally identified, such as the photograph is in black and white, obviously implying its an old photograph, the attire that both the servants and family are sporting also reinforce the notion of old times. Looking closer at the picture we can begin to identify some clues about the uniform, postures of the Indian servants, how the furniture is arranged and the general setting. We can see that some of the relatives are sitting, some are standing and all of the servants are standing. We can piece together an idea about the relations between the individuals and what sort of occasion it is. Photographs usually only tell the story that the creator wants you to see. For example; a family photograph album may show exciting events such as births, weddings, christenings, parties etc, but the unexciting, boring times are left out, families can tell selective stories about themselves in this way, and how their history is a particular form of social construct. Within this photograph, some people are looking at the camera and some seem uninterested, looking away. This implies to me, that the occasion isn't a special one, only an every day occurrence, or maybe the people looking at the camera are enthralled by this new piece of technology and the others aren't phased. ...read more.

So the opinion that everyone takes on the photograph is different and distinct, just as when you roll a dice. The traits of studium and punctum are quite opposite, with studium expressing reality, truth, showing information and documentation, and with punctum conveying magic, beauty and maybe even poetry. Punctum can inspire a deep and powerful personal significance, as we draw from our private past experiences and involves denotation whereas studium involves connotation. A photograph becomes surprising when we don't know why it has been taken, we don't know what the motive is, or why the interest. In relation to my picture I believe it is purely a picture of a wealthy, powerful family at the time of the British Raj, and used to portray the life that the upper-class families lived at that time. I see the studium that the photographer has achieved, but I don't feel the picture contains punctum; it won't have a lasting effect on me. It was interesting to analyse, because of the ambiguity that the photograph contains, and how the Victorian English ways were taken to India and put upon their culture. The image immediately yields a message whose substance is that of prosperity and wealth. The purposes of the functions within the punctum are to inform, represent and to evoke a desire, this photograph didn't do that for me, instead it induced a refined interest. ...read more.