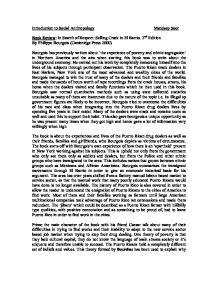 Introduction to Social Anthropology Mandeep Soor Book Review: In Search of Respect: Selling Crack in El Barrio. 2nd Edition By Philippe Bourgois (Cambridge Press 2000) Bourgois has previously written about 'the experience of poverty and ethnic segregation' in Northern America and the aim when starting this book was to write about the underground economy. He carried out his work by completely immersing himself into the lives of his subjects through participant observation. The Puerto Rican crack dealers in East Harlem, New York one of the most advanced and wealthy cities of the world. Bourgois managed to win the trust of many of the dealers and their friends and families and made thousands of hours worth of tape recordings from the crack houses, streets, his home when the dealers visited and family functions which he then used in this book. Bourgois saw normal quantitative methods such as using state collected statistics unsuitable as many of them are inaccurate due to the nature of the topic i.e. its illegal sp government figures are likely to be incorrect. Bourgois tried to overcome the difficulties of his race and class when integrating into the Puerto Rican drug dealers lives by spending five years in their midst. Many of the dealers were crack and cocaine users as well and used this to support their habit. This also gave bourgeois a unique opportunity as he was present many times when they got high and hence gave a lot of information very willingly when high. ...read more.

Gender roles in the rural Puerto Rican community were laid out very clear cut however patriarchy is failing El Barrio, as men leave their girlfriends once they become pregnant. Women also want the same autonomy as the males and become more masculine. One example is when Candy finally confronted her abusive husband and shot him. She sought greater solidarity through selling drugs herself, while still attempting to bring up her four children. Candy's strive for power led her to invert patriarchy when dating Primo, she financially provided for him as well as being the sexually dominant authority. This is a definite taboo in rural Puerto Rico, and even though this may have been Primo's inner city fantasy it conflicted with his definition of masculinity and that of his jibaro culture. Primo ended the relationship. The definitions of masculine and feminine gender role are constantly being remoulded in El Barrio. There is a crisis of masculinity where the males feel powerless and take on a gigolo type role with many children from different partners without any responsibility to them, and celebrate this behaviour. The females struggle between trying to find personal solidarity and independence through drugs and between traditional roles where they are mothers and wives. Street culture represents even more exploitation of women and female roles however. When Candy sold cocaine she was berated by other men for ignoring her children. ...read more.

In school because they could not get the approval of teachers and other students respect again due to a lack of cultural capital they tried to assert themselves through deviant acts. This early socialisation carries on through adulthood. The bulk of Bourgois's research is from his participant observation and his tape recordings. It's high in qualitative content, but the criticism of this is obviously that Bourgois himself chose what to include in the book and is very determanalistic in his approach. One of the major strengths of this book is the fact that Bourgois was able to win the trust of the drug dealers and became friends with them. This is quite a groundbreaking piece of work from the perspective that much of the work done on rural poverty before especially on street culture has depicted the groups in a hostile and negative way. One of the aims of this book was to give a true account of the drug dealers, their friends and families, their structural oppression and daily difficulties. In my opinion this book has managed that beautifully, putting a face to the drug dealers and humanising them in a completely new way. Bourgois has stepped away from using anthropology's functionalist approach that explains all actions to be in harmony with each other, he refuses ideas such as Lewis's culture of poverty and uses a political and economic argument to base his reasoning. I believe that Bourgois has managed to represent this community accurately and has presented it in an easily readable and digestible manor. ...read more.