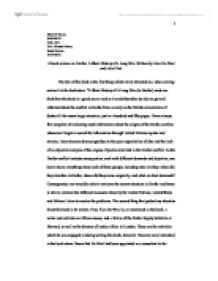 Book Review on &quot;Darfur: a Short History of a Long War&quot;

Nihal El Banna 900061813 PolS. 202. Prof. Ninette Fahmy Book Review 10/26/2007. A book review on: Darfur: A Short History of a Long War. Written by Alex De Waal and Julie Flint. The title of this book is the first thing which really attracted me, when coming across it in the book store. "A Short History of A Long War (in Darfur) made me think that this book is a good one to read as I would therefore be able to get well informed about the conflict in Darfur from as early as the British colonization of Sudan till the resent tragic situation, just in a hundred and fifty pages. I have always felt incapable of collecting much information about the origins of the Darfur conflict; whenever I begin to search for information through United Nations reports and articles, I soon become discouraged due to the poor organization of data and the lack of an objective analysis of the origins of parties involved in the Darfur conflict. As the Darfur conflict includes many parties, each with different demands and objective, one has to know everything about each of those groups, including who are they, when did they interfere in Darfur, where did they come originally, and what are their demands? Consequently, one would be able to evaluate the current situation in Darfur and hence is able to evaluate the different measures taken by the United Nations, United States and African Union to resolve the problems. ...read more.

Going back to the population composition in Darfur, the writers argue that the Masalit are a very significant group in Darfur.3 The authors explain their point by going back to the nineteenth century, when the Masalit's power reached its peak in Darfur as they had tried to attain an independent rule. The status of those above mentioned ethnic groups has changed as time passed in terms of political dominance. This attributes to many factors, which are extremely complex, and which the writers try to simplify through out the book. The writers try as much as possible to describe what the factors which led to the so-called dominance of Arab ethnicity in Sudan, and Darfur in particular, during the resent years are. They argue that the government in Khartoum has been finding great difficulty in giving up a small portion of its authority to arising opposition movements in Sudan, and therefore the government has been trying to gain alliance from as many ethnic groups as possible in Darfur and giving them privileges in Darfur as a reward. The authors argue that the Khartoum government had been encouraging the Islamist movement in Darfur and had given individuals of Arab origins political leadership privileges in Darfur all along. Moreover the authors go further in order to prove this, saying that during the 1980s when regional elections took place in Darfur (in 1981), Arab racists called for unification, calling on the Zaghawa and other Arab groups to be united for unification. ...read more.

De Waal argues that there is no substantial evidence to prove that the killings in Darfur are derived from ethnic reasons as some describe that "Arabs are killing Africans". Moreover, he argues that it is impossible to legally deprive the Sudanese government from access to weapons as nothing proves that the government would not provide safety and security to the Darfurians using these weapons. Therefore, one could deduce that the authors clearly oppose the idea of military intervention in Sudan which Susan Rice (assistant secretary of state for African affairs from 1997 to 2001) has proposed for the US government. And so, the writers are not merely writing the book for the sake of propaganda.8 De Waal clearly refuses any International intervention in Darfur via force as he writes in one of his articles "Any principle of intervention can readily be abused - as by the French in central Africa - or become a charter for imperial occupation. There may be cases in which imperial rule is the lesser of two evils, perhaps to end genocide (a current preoccupation) or to end slavery (a late 19th century one), but philanthropic imperialism is imperial nonetheless." In this article the writer refers to his book Darfur: a short history of a long war, and therefore one could not but relate the ideas of the writer in the book to the writer's argument in this article. ...read more.