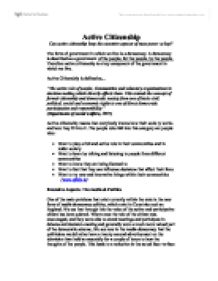 Can active citizenship keep the excessive aspects of state power at bay?

Active Citizenship Can active citizenship keep the excessive aspects of state power at bay? The form of government in which we live is a democracy. A democracy is described as a government of the people, for the people, by the people. Therefore active citizenship is a key component of the government in which we live. Active Citizenship is defined as... "The active role of people, Communities and voluntary organisations in decision making which directly affects them. This extends the concept of formal citizenship and democratic society from one of basic civil, political, social and economic rights to one of direct democratic participation and responsibility." (Department of social welfare, 1997) Active citizenship means that everybody knows how their society works and how they fit into it. The people who fall into this category are people who: * Want to play a full and active role in their communities and in wider society * Want to learn by talking and listening to people from different communities * Want to know they are being listened to * Want to feel that they can influence decisions that affect their lives * Want to try new and innovative things within their communities (www.offaly.ie) ...read more.

Without the support of these politicians, their job becomes impossible. The aim of journalists is to enlighten and inform the people on political matters, while for the politicians the media is a means of persuading the electorate. These two paths cross and form a mutualistic agreement. OR As people who are involved in Voluntary organisations These are people who appear to have a stronger commitment to the development of civil society in Ireland than is general within the population as a whole In working within the civil society, in a way they take the complete control away from the government by taking action of their own accord. Civil Society can be defined as... "Those areas of social life organised through private or voluntary arrangements outside the direct control of the state." (Green paper, supporting voluntary action, 1997) Civil Society is the "other side" of the state, "those areas of social life...which are organised by private and voluntary arrangements between individuals and groups outside the direct control of the state." ...read more.

There is an added benefit of bringing in local volunteers into decision-making of these organisations as they each have a large degree of local knowledge, however the voluntary sector faces many challenges, such as: * A fall off in the number of volunteers * More paid workers in community organisations leading to tensions * Voluntary groups are now being asked to get involved in policy and decision making as well as offering services in their community and they find it hard to find the time for both * Volunteerism can be seen as under-threat as people feel tired and over-worked Facts & Figures (Volunteeringireland.com) * 33% of the adult population currently volunteers * Volunteering rates are dependent, amongst other things on age, sex, class, marital status and where people live * People volunteer for an average of 5-12 hours per month, some give less than an hour whilst others give over 50 hours per month * The two main rewards people feel from volunteering are the satisfaction of seeing the results and the feeling of doing good. * 94% of people believe that voluntary work encourages people to become actively involved in society http://www.volunteeringireland.com/Frameset_TheBasics.htm ...read more.