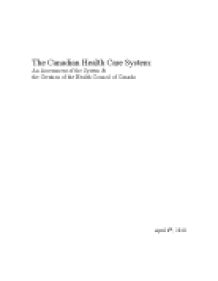 ﻿The Canadian Health Care System: An Assessment of the System & the Creation of the Health Council of Canada April 6th, 2010 The Canadian health care system has been a work in progress since its inception. Reforms have been made over the past four decades and will continue in response to changes within medicine and throughout society. However, the basic principles remain the same - universal coverage for medically necessary health care services to be provided on the basis of need, rather than the ability to pay. Canada's publicly funded health care system can be best described as an interlocking set of ten provincial and three territorial health insurance plans. Known to Canadians as "Medicare", the system provides access to universal, comprehensive coverage for medically necessary hospital and physician services. Despite the slow improvement that has occurred, it has become clear that since the implementation of the Canada Health Act in 1984, Canada?s health care system has been in decline and has fallen significantly behind nations like the U.K., Sweden and Finland[1]. The degradation of the Canadian healthcare system has been a gradual process, which has had many negative consequences. Despite negative indications, policy trend in Canada saw a decrease in transfer payments as a percentage of GDP from the Federal to Provincial governments as well as the vertical downloading of responsibility to maintain social services like health care and welfare[2]. Under this scenario, the Provinces control immense power over the quality of health care given to citizens of each respective province, and due to the regional inequality and diverging ideology of the various dominant political parties, health care between the ten provinces varies widely[3]. ...read more.

Finally, the trend of increasing waiting times for diagnosis has come to be a serious problem, as they have doubled in the last decade[17]. Currently, the average waiting time from referral from a GP to actual treatment is 17.7 weeks, which percent jumped 7% from 2003-04[18]. To further demonstrate the disparity and lack of equality in the current system, Saskatchewan has the longest waiting time at 29.9 weeks and Ontario has the shortest at 14.3 weeks, which is a 15.5 week disparity[19]. When doctors were polled by the Fraser Institute, 90 percent of the 3000 doctors from 12 specialties believe the delays are unreasonably long[20]. This is a simple exemplification of the deterioration of efficiency in the heath care system as the current equipment and quantity of human resources are clearly inadequate to deal with mounting demand. The Federal government?s primary interest is to make ?the Canadian health care system the best in the world and Canadian people the healthiest in the world?[21]. This primary objective could have been realistically obtained by renewing the foundations of Medicare, by ensuring that equality, accessibility and transparency are primary tenants of the reformation. Once the internal objectives have been completed there is a desire to move beyond Canadian borders to consider Canada?s role in improving health standards around the world. Finally, the Federal government believes that relying on the status quo is not a feasible option and have committed to investing money to stabilize the system in the short-term by enduring change in the long-term. The Provincial governments have similar objectives as the national government, yet they do not have the same unified vision in the successful reformation. ...read more.

Since the release of Romonov?s Report, there have been many challenges to the creation of the HC. The most prevalent issue is the transformation of the Romonov concept of a 14-member board existing at arms length, to a 27-member board consisting of a chairperson, 13 members from inside various levels of government and 13 from outside. This change prompted ex-premier Ralph Klein to back Alberta out of the deal, claiming ?the health council is not a representation of what was discussed and agreed upon by the PM and Premiers last February [2003]?[37]. Furthermore, many other analysts have criticized this change because its unwieldy size facilitates failure and due to the fact that the non-governmental seats are handpicked by the government, transparency and governmental control could prove to be problematic[38]. To compliment this critical problem, issues of public mistrust of government exists as the creation of the commission and HC can be seen simply as means for the Federal government to lessen responsibility for the health care crisis. However, despite such interpretations, the HC in actuality has helped create a viable plan to retain the viability of the health care system in Canada. By enacting this policy laid out in the Romonov Report, the Canadian government sent many messages to their citizens. Firstly, that Canada is a nation with a well-developed welfare state and is unwilling to allow its citizens to live in an environment where the citizenry?s well being is compromised by a lack of commitment on the part of the Federal government. Secondly, the creation of the HC helped resolve has since been called a ?democratic deficit? in Canada. Thus, by creating more transparency the government has encouraged more participation and focuses on the actions of the government on the part of the citizenry. ...read more.