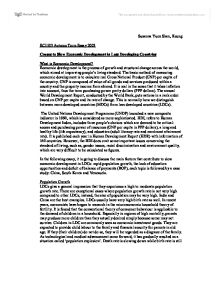 Susanna Yuen Shan, Keung EC1103 Autumn Term Essay 2003 Causes to Slow Economic Development in Less Developing Countries What is Economic Development? Economic development is the process of growth and structural change across the world, which aimed at improving people's living standard. The basic method of measuring economic development is to calculate real Gross National Product (GNP) per capita of the country. GNP is composed of value of all goods and services produced within a country and the property income from abroad. It is real in the sense that it takes inflation into account, thus the term purchasing power parity dollars (PPP dollars). The annual World Development Report, conducted by the World Bank, puts nations in a rank order based on GNP per capita and its rate of change. This is normally how we distinguish between more developed countries (MDCs) from less developed countries (LDCs). The United Nations Development Programme (UNDP) launched a new composite indicator in 1990, which is considered as more sophisticated. HDI, refers to Human Development Index, includes three people's choices which are deemed to be critical: access and purchasing power of resources (GNP per capita in PPP dollars); a long and healthy life (life expectancy); and education (adult literacy rate and enrolment attainment rate). It is published each year in Human Development Report (HDR) with information of 160 countries. However, the HDI does omit some important issues concerning the standard of living, such as, gender issues, racial discrimination and environment quality, which are very difficult to be calculated as figures. In the following essay, it is going to discuss the main factors that contribute to slow economic development in LDCs: rapid population growth, the lack of education opportunities and deficit of balance of payments (BOP), each topic is followed by a case study: China, South Korea and Venezuela. Population Growth LDCs give a general impression that they experience a high to moderate population growth rate. ...read more.

As for the tertiary sector where most of the jobs are providing services rather than goods, labour necessitate a certain level of literacy and communication proficiency instead of only technical skills. For example, a person working in a bank should have obtained education on accounting skills and also the ability to communicate and understand the need of customers coming to the bank. An accounting degree would further his ability, productivity and prospect in this field. Illiteracy in LDCs has been one of the biggest causes of underdevelopment since most of the people stay in the primary sector, normally the agricultural sector where their income greatly depends on vulnerable weather and exchange rates. Unemployment rate is the percentage of people who are unemployed while they are able and willing to work. LDCs often have very high unemployment rate simply because of there are not enough jobs. Since not many people in LDCs are properly educated, very few of them possess the skills to work outside the primary sector where it requires higher level of skills and knowledge. However, limited numbers of people can be employed in one farm. This causes unemployment. In some cases, it could be referred to skill mismatch. People who used to work in a coalmine that is now closed because of the change of taste in the market are very difficult to find a job in some other fields. They do not have the mobility to change from one industry to another and it takes time for the government to train them so that they can become capable of other jobs. This is called structural unemployment, which is quite common in LDCs. The lack of education opportunities and unemployment contribute to low standard of living in LDCs. As a result of their illiteracy, people find it very hard to be employed to a higher paid job. Poor families with low incomes cannot support their children to proper education. ...read more.

In China, its huge population and rate of growing has been a problem the government would like to solve by the 'one-child' family control program. The Chinese government claims that birth control has helped China to develop in economic and social point of view, though some people might think that the sacrifice of human rights deserves more. South Korea has made remarkable improvements by spending government expenditure on education of youth and adults in order to increase its people's productivity. It has clearly noticed that there is a strong linkage between education and employment that could help itself getting off the LDC list. If we ignore the fact that it has received massive foreign aid from countries like the United States, South Korea is actually a good example showing economic development, particularly in education. The case of Venezuela indicates the danger being a major oil exporting country that change in oil prices can lead to BOP unbalances. Negotiating loans with and following advices of IMF eventually cure the inflation problem, yet people were not happy about the unemployment and decrease in income per capita. I believe that a government has to pay attention to its trend of HDI when making domestic and international policies since its priority should always be its people's standard of living. It is not difficult to spot the areas that need improvement but it is very complicated to choose the right method to tackle them because policies themselves could be interactive. After all, 'economic development' is a fairly broad and ambiguous term and it undoubtedly takes intelligence and experience for policies makers to digest it. Reference: Bagchi A. (1982) The Political economy of underdevelopment, Cambridge University Press, Cambridge Bannock G., R. E. Baxter and Davis E. (1998) Dictionary of Economics, Penguin Books, England Ghatak S. (1998) Introduction to Development Economics, Routledge, London and New York Mabro R. (1992), OPEC and the price of oil, Oxford Institute for Energy studies, Oxford Rees G. and Smith C. (1998) Economic Development, Macmillan, London United Nations Development Programme UNDP (various years) Human Development Report, OUP, New York http://www.worldbank.org/data/maps ...read more.