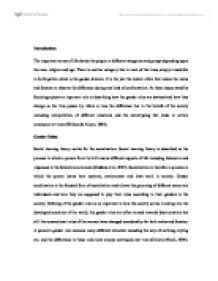 Introduction: The important norms of life divide the people in different categories and groups depending upon the race, religion and age. There is another category that is most of the times simply irresistible to be forgotten which is the gender division. It is the just the instant reflex that makes the males and females to observe the difference during any kind of confrontation. As these issues stand by Sociology plays an important role in describing how the gender roles are devised and how they change as the time passes by. More or less the difference lies in the beliefs of the society including interpretation of different situations and the stereotyping that leads to certain conclusion at times (Wallace & Alison, 1995). Gender Roles: Social learning theory works for the socialization. Social learning theory is described as the process in which a person from its birth learns different aspects of life including behaviors and responses to the behaviors as he sees (Giddens et al, 2007). Socialization is therefore a process in which the person learns how customs, environment and laws work in society. Gender socialization is the focused form of socialization and allows the grooming of different sexes into individuals and how they are supposed to play their roles according to their genders in the society. Defining of the gender roles is an important in how the society works. Looking into the developed countries of the world, the gender roles are often termed towards discrimination but still the conventional roles of the women have changed considerably for both males and females. ...read more.

They are just moving away from the basic means of life. The inclusion of stress, pain and sleeplessness with the essence of loneliness has made the whole American society to become solvent in the current society. The birth rates are going down, new born babies are not having the right kind of learning scenarios and the gender differentiation is causing the frustration as well (Andersen, 1993). The discrimination and racism has also increased considerably against the women. Many men are still unable to realize the reality that females now hold equal rights and require respect. When this happen they are going around the way and try to gain the dominance by either beating or by other measly actions. This has caused the ratio of domestic violence to gain as well. The families and household structures in America have changed considerably therefore. The females are not confined to the homes only and the males are not confined to offices only. Males also take the responsibilities for the growth of their children when their wives are doing office works. This is where the sociological aspects of the America have changed quite a lot. The gender discrimination might not be present on a larger scale and at one place where they have provided good results, bad results are also present. Gender Roles in Hong Kong: Hong Kong has a very strong cultural and sociological structure. The Chinese structure of the families play an important role in the Hong Kong culture where the gender roles are changing but they are being kept at a steady pace (AU, 1993). ...read more.

Conclusion Americans are leading the world, not because they have adequate resources to do so, because they care about the issues and try to trigger that out. They are liberal towards human rights and believe that both men and women have capacities to perform duties traditionally symbolize to one. Hong Kong on the other hand is not paying attention to what we can say "call of Time". Increasing number of women physicians, judges, teachers, scientists are the resources of America. Though we know, Americans still have to do a lot towards actual gender equality and ideal changing gender roles, they have to rectify the pay inequality, they need to increase the number of women in top level management to show that women can do almost everything associated to men, traditionally. This is the wakeup time for Hong Kong Government to educate their people towards changing gender roles and to create equal employment opportunities with positive intensions. Women of this era are not t all less than man. At this stage, we need to promote and encourage gender equality and equal employment opportunities and to do this first we need to introduce more gender equality curriculum. Otherwise, we will remain behind not only from America but from other nations too. This is not an easy task as we don't know how much this gender-based curriculum penetrated in our upcoming youth. Policy measures are required at organizational level both in education and business organization. Apart from curriculum and equal employment opportunity, media should be the source to educate people. Power of media can be use as an opportunity to educate people quickly and effectively. ...read more.