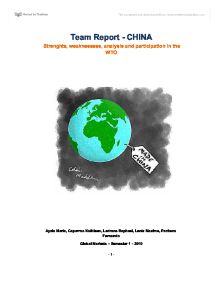 Team Report - CHINA Strenghts, weaknessess, analysis and participation in the WTO Ayala Mar�a, Caparros Kathleen, Ledrans Raphael, Lentz Maxime, Pacheco Fernando Global Markets - Semester 1 - 2010 Executive Summary Introduction Currently the globalization plays an important role for the development of the emerging country. There are some countries which contribute more than others on the global growth of economy such as the BRIC nations and especially China which is the emerging country which bring forward the most in the global growth. It is why we focus on the strengths and weaknesses of china from a politico-economic, social and environmental perspective and also on its geopolitical role in the aim to focus on the future of China and how it can become the first-order global power in the world. Stage 1: Strengths and weaknesses of China from a political, economic, social and environmental perspective Each country being unique, it has strengths and weaknesses which are peculiar to it. They are defined with regard to the rest of the world. We can distinguish six axes of study (politic, economic, socio-cultural, technologic, ecology, and legal). In this part we will study the politico-economic, social, and environmental factors. Politico-economic: Politically, China combines a socialist political regime with the aim of a market economy. In practice, China is a unitary state, where the Chinese Communist Party holds all political power. So with the liberty of trade china can give to the companies the same advantages as western countries but at the same time it is a totalitarianist and communist state in which the labour unions are controlled by the government party so they are not really powerful. ...read more.

China has a dual level tax regime, which differentiate domestic and foreign firms. Some measure has been taken to encourage foreign firms coming in China for example; the state tax rate for foreign companies can be reduced by 15 percent if they are located in special administrative zones. Furthermore foreign owned enterprises are subject to a three year tax exemption which is followed by another three years of 50% reduction in taxes (U.S. Securities and Exchange Commission Annual Report, 2005). Value added taxes (VAT) are divided into three categories, a standard rate of 17 percent, 13 percent and 6 percent for small enterprises. Exporters enjoy zero VAT and can obtain VAT refunds from national trade. There is no tax on dividends and 10 percent tax is applied to interest and royalties (Business Monitor International, 2006b). China encourages the setting up of small companies by granting to them a reduced VAT, and it attracts companies by exempting them of exports' VAT. Moreover, without tax on dividends China incites stock exchange investments (because as mentioned before Chinese people tend to save money but do not invest, and china also wants to convince foreigners to be fiscally taking up residence and to invest there). And concerning the royalties the taxation rate is lower than other countries, this motivate collaboration between China and other countries and facilitate the exchanges. Social: A study shows that both urban and rural population has a level of welfare which allows them to spend a significant share of their income on non basic survival requirements. This totally explains why China is beginning one of the biggest potential markets around the world. ...read more.

China has also participated in the Doha Round Trade Talks which was the first multinational trade talks with the aim to lower trade barriers around the world which will allow countries to increase trade globally. To keep: - Participation in world organizations (WTO, IMF, ...) - Taxes and fees system which valorises the FDI (link with the exchange rate) To improve: - To have a totally floating exchange rate (to improve FDI) - Educational system (to have more skilled labour) progressively increase the obligatory age of attending school - Financial system - To privatize - Develop services thanks to the FDI - Totally open the market To eradicate: - Corruption Conclusion China which is one country of the BRIC nations is the one which contributes the most into the global growth. In fact China is the destination number one for foreign direct investment and the third largest trader in the world. China is already involved in the world economy and it is why it needs to keep some factors in the aim to sustain its economical growth such as its participation into world organization and also needs to keep its taxes and fees system which gives value to foreign direct investment. However if China want to become the leader in the world economy, they need to reform and manage some factors such as their exchange rate and financial system in the aim to open all its market to the world. They also need to reform their educational system, to develop their services in the country and to eradicate the corruption in China. China is going to change all of these factors since few years and will become probably one of the most powerful countries in the world. ...read more.