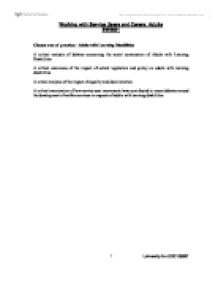 Primarily we all aspire to live independently. But working with diversity does not mean treating everyone the same. The Department of Health made an interesting statement, confirming this claim, when discussing the education of disabled children saying: Ensuring equality of opportunity does not mean treating everyone the same. It does mean understanding and working knowledgably with diversity (DfES/DOH/Home Office 2000 para 1:43) Handouts 'Working with Disabled Children' Dawn Judd 23/10/05 Did the Griffin Report, 1988 Community Care: An agenda for action, encourage working with diversity in an understandable and knowledgeable manner? This reflected governmental commitment to increase choice -increasing roles for the private and voluntary sectors in residential and domiciliary services, but Social Service authorities would take the lead role in purchasing and organising care. The NHS and Community Care Act 1990 encouraged a needs-led approach to assessment. Requiring that the Social Worker or assessor to look at what services may have to be purchased or provided to enable that individual to live more independently. Sapey (1993), made this argument: That the NHS and Community Care Act 1990 is simply the continuation of an ideological tradition within social policy that started with the Poor law of 1601 in that it maintains that it is local authorities, rather than disabled people, who know best what is needed by the latter. (Cited in Oliver and Sapey,1999, pg 68) The 'voice' of the person with a learning disability failing to be heard; the ideology of the Mental Deficiency Act 1913 stated that 'feeble-minded people were neither idiots nor imbeciles, but if adults, their condition was so pronounced that they require care, supervision, and control for their own protection or the protection of others" . We once again see the entrenched attitudes of we 'know best'! This is reinforced by Morris, (1993) who argued that: the aim of independent living is held back by an ideology at the heart of community care policies , which does not recognise the civil rights of disabled people but instead considers them to be dependant people in need of care. ...read more.