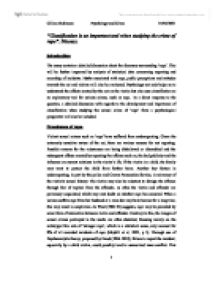 &quot;Classification is an important tool when studying the crime of rape&quot;

"Classification is an important tool when studying the crime of rape". Discuss. Introduction The essay contains a detailed discussion about the discourse surrounding 'rape'. This will be further improved by analysis of statistical data concerning reporting and recording of incidents. Myths associated with rape, public perceptions and attitudes towards the act and victims will also be evaluated. Psychology not only helps us to understand the effects created by the act on the victim but also uses classification as an explanatory tool for serious crimes, such as rape. In a direct response to the question, a detailed discussion with regards to the development and importance of classification when studying the sexual crime of 'rape' from a psychological perspective will also be included. Prevalence of rape Violent sexual crimes such as 'rape' have suffered from underreporting. Given the extremely sensitive nature of the act, there are various reasons for not reporting. Possible reasons for the reluctances are being disbelieved or discredited and the subsequent effects created by reporting the offence such as, the bad publicity and the influence on current relations in the victim's life. If the victim is a child, the family may want to protect the child from further harm. Another key feature in underreporting, in part by the police and Crown Prosecution Service, is relevancy of the victim's sexual history. The victim may also be reluctant to divulge the offence through fear of reprisal from the offender, as often the victim and offender are previously acquainted, which may cast doubt on whether rape has occurred. When a woman suffers rape from her husband or a man she may have known for a long time, this may result in scepticism. As West (1984:10) suggests, rape may be preceded by some form of interaction between victim and offender. Contrary to this, the images of sexual crimes portrayed in the media are often distorted, focusing mainly on the archetypal few acts of 'stranger rape', which in a statistical sense, only account for 8% of all recorded incidents of rape (Mayhill et al, 2002, p 3). ...read more.

Michaud (2000, p2), commenting on the motivations of Ted Bundy, suggests that "aberrant offenders use ########### to validate their deviance....The more they see of it, and masturbate to it, the more their behaviour is reinforced. Rape affects all women, no matter what their age, race or status. The licentious nature of rape can psychologically produce in the victim a sense of shame, guilt and personal responsibility. This self- blame is further encouraged and affirmed by the degree of personal responsibility, underpinning the aim of crime reduction strategies. The main point being, that every women should reside themselves as being a potential victim. These strategies advise and encourage women to take responsibility for their own safety by being vigilant, attempting to limit the possibility of becoming a victim. They are also advised to be aware of how they dress, where they go and who with. All of which, facilitate and encourage constraint on the life and liberty of the woman and not on the rapist. However well implemented, the use of these types of crime prevention strategies does not mean that all rapes will be prevented through precautions taken by women. Rape has received a high level of media attention produced by the startling results of a recent social survey. Arguably, the act itself is met with abhorrence by the vast majority of people in society. However, an opinion poll conducted by I.C.M titled 'Awareness of Sexual Assaults in the U.K ', on behalf of Amnesty international portrays some disturbing public attitudes towards 'rape' and the 'victims of rape'. The poll consisted of interviewing a random sample of 1095 adults, indicated that a third of people within the U.K believe a woman is partially or totally responsible for being raped if she has behaved in a flirtatious manner. Also, a similar 'blame culture' exists in relation to clothing (26%) and promiscuity (22%). Similarly, more than 30% said a woman was partially or totally responsible for being raped if she was drunk (Amnesty International, 2005). ...read more.

This category accounts for 40% of all rapes and is the most common form of rape (Rape, Wikipedia, 2006). The 'Anger Retaliatory', suggests a great deal of rage, either towards a specific person or group. The 'Sadistic', suggests that the offender gets sexual gratification from the victim's pain and suffering and the last being, the 'Opportunistic' that suggest the offender is out to satisfy immediate sexual impulses. Conclusion Statistical analysis revealed that the reporting of rape incidents is increasing, resulting in a higher recording rate. This could be a result of the improved legislative definition, but also through improvements in reporting facilities such as the development of 'rape suites' within constabularies. Despite the improvement, there has been little improvement on conviction rates. Rape mythology is still prevalent and public perceptions and attitudes to 'rape', 'rapists' and 'victims' are distorted and influenced by the sensationalised media images of high levels of 'stranger rape' which in reality only account for a small percentage. Also, the media image of 'rapists' as 'madmen' for which, the research revealed the majority of rapists, especially serial rapists were deemed normal by their acquaintances. Gender disparities still exist in society. Women are dominated and objectified in the media, which in turn enforces patriarchal attitudes. Some feminists were of the view that 'rape' is a tool of oppression and that certain crime reduction strategies aimed at preventing the proclivity of rape, help to fuel the constraints on women in society. The essay also sought to discuss how classification of the act is an essential tool, when studying the crime of rape within a psychological framework. It is clear that from the research that there are various forms of 'rape' and various types of 'rapists'. As a result of these variations, and the distorted media imagery, psychologists have developed classification systems which categorise the various acts, based on 'behaviours' and 'motivations', in an attempt to fully comprehend the nature of the act. By doing so, they identify the reasons for the act and the motivational intent involved. ...read more.