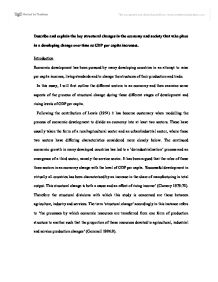 Describe and explain the key structural changes in the economy and society that take place in a developing change over time as GDP per capita increases. Introduction Economic development has been pursued by many developing countries in an attempt to raise per capita incomes, living standards and to change the structures of their production and trade. In this essay, I will first outline the different sectors in an economy and then examine some aspects of the process of structural change during these different stages of development and rising levels of GDP per capita. Following the contribution of Lewis (1954) it has become customary when modelling the process of economic development to divide an economy into at least two sectors. These have usually taken the form of a rural/agricultural sector and an urban/industrial sector, where these two sectors have differing characteristics considered more closely below. The continued economic growth in many developed countries has led to a 'de-industrialisation' process and an emergence of a third sector, namely the service sector. It has been argued that the roles of these three sectors in an economy change with the level of GDP per capita. 'Successful development in virtually all countries has been characterised by an increase in the share of manufacturing in total output. This structural change is both a cause and an effect of rising income' (Chenery 1979:70). Therefore the structural divisions with which this study is concerned are those between agriculture, industry and services. ...read more.

goods such as automobiles, furniture, utilities and facilities for education and healthcare. As a country successfully industrialises and a greater percentage of the economy's GDP is accounted for by manufactured goods, the level of savings in the economy will rise as people acquire higher levels of disposable income. As a result, investment will rise and domestic firms will invest in improving the quality of existing physical and human resources, increasing the volume of capital machinery and raising the potential output of all or specific resources through innovation or research and development, which will in turn increase output and productivity levels. However the extent to which an economy can progress will depend on how quickly and efficiently an industry can work to supply for the new changes in demand. One outcome of industrialisation is the improvement of an economy's balance of payments position. As the total output of domestic industries increase (shown diagrammatically in outwardly shifting of the Production Possibility Curve), firms are able to export goods to other countries. However, the degree of improvement of a country's BoP position will depend on the willingness of foreign countries to accept export prices as they may impose protectionist barriers, as well as the volume of goods that will be imported as a result of higher per capita incomes. Another outcome of industrialisation is the increase in the standard of living in society due to higher incomes and the provision of basic needs such as food, healthcare, education and transport. ...read more.

Conclusion In this essay, I have attempted to identify and discuss the structural changes that take place both in an economy and in society during development as production moves through the three economic sectors and incomes rise. I have therefore attempted to examine theoretical and empirical evidence to explain how and why rising incomes, among other factors, have lead to such changes in production structures. As I have mentioned earlier, industrialisation may be one of the single most influential factors to which a developing country advances towards 'maturity' and sustained economic growth. However in reality, the record of industrialisation in the 'Third World' is to some extent diverse. In some newly industrialised economies such as Malaysia, Thailand, South Korea and China (to a degree China may be considered as a developed country), there has been continuous economic growth of up to 10%-15% of GDP per annum. This may be due to the ability of these countries to successfully promote a good financial system, political and social stability and an economy that welcomes foreign direct investment through state provisions of merit goods and infrastructure. 'Modern economic growth' as defined by De Long 'is the large-scale shift of employment from agriculture to manufacturing and now services. And it is the creation of large business organisations' (De Long 2002:131). Although it is important to progress through the economic divisions of an economy, it is also fundamental that all three sectors are maintained, as all sectors support each other in such a way that agriculture provides many of the industrial sector's inputs - cotton, tobacco and rubber and industry releases labour for the service sector. ...read more.