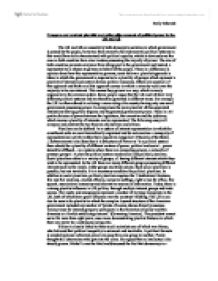 Compare and contrast pluralist and ruling elite accounts of political power in the UK and US.

Compare and contrast pluralist and ruling elite accounts of political power in the UK and US The UK and US are essentially both democratic societies in which government is passed by the people, however, they cannot be fully democratic political systems as this would have to be characterised with political equality, which is obviously not the case as both countries have clear leaders possessing the majority of power. The size of both countries prevents everyone from taking part in the government and instead, a representative is chosen to govern on behalf of the people. There is a difference in opinion about how this representative governs; some believe a pluralist approach is taken in which the government is responsive to a plurality of groups which represent a plurality of interests and control diverse political resources. Others are sceptical of this approach and think an elitist approach occurs in which a minority rules over the majority in its own interest. This means they govern in a way, which is rarely responsive to the common public. Some people argue that the UK and US have very different political systems and are therefore governed in different ways. ...read more.

All organisations, even if they aspire to be democratic, inevitably degenerate into oligarchy (rule by a few). Ruling elite refers to a minority which governs in its own interest and which is not accountable to the majority. It is defined by the possession of three characteristics: consciousness, coherence and conspiracy. Consciousness refers to the awareness of common interests, coherence means that it shares a common interest and conspiracy describes the capacity to act collectively. The UK can be described as being ruling elite due to one small government being in control and where power essentially lies with the Prime Minister. With parliamentary majority, the cabinet can make any decisions they want which was recently demonstrated with issue of the war in Iraq. Many pressure groups opposed and campaigned against Blair's decision to go to war, which in the end had no lasting effect as he made the decision regardless of many peoples opinions. The US can also be considered as an elitist country due the fact that a lot of money goes into US politics compared with the UK. This has resulted in the high campaigning costs, thus limiting who is able to run for election. ...read more.

In order to appeal to ordinary voters, ruling elites must serve the public and cannot imply follow their own interests. Pluralism is very similar in which many views are represented and served. Theories of polyarchy (democratic elitism) accept that most citizens do not take part in politics. Other theories of democratic elitism discuss the fact that there are elites within specific fields, for example in health and military, once again a plurality of elites. In conclusion it can be seen that the UK and US share many characteristics, which can be seen as being both pluralist and elitist. However the US is essentially more pluralist with dispersed points of access with fragmented state power. The government has sub-ordinates and sub-governments, which are very different to the UK where power is more concentrated with one person, the Prime Minister. There are many differences between the two theories; however, some similarities can be seen, linking the two. Dahl argued that most people are not interested in participating much in politics, thus only a small group of individuals is involved who have to compete to win elections by appealing for popular support. Schumpter and Dahl renamed the theory as pluralist elitism, in which politics in countries like the UK and US is polyarchy, rule by many elites (a plurality of elites). ...read more.