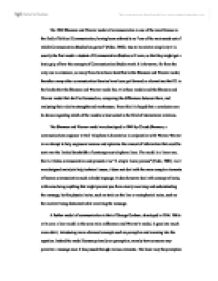 Compare and contrast Shannon and Weaver's model of communication with two of the following: Gerbner, Lasswell, Newcomb, Westley, Maclean, Jakobson. Which model would be most suited to the area of international relations?

The reason for choosing these three is simply so that it is possible to compare both linear models with different focusses and equally how these two compare to a non-linear model. We must also make these comparisons trying to assess each model for its usefulness in the field of international relations. The Shannon and Weaver model is renowned for its simplicity. It deals simply with how communication travels from the transmitter to the receiver worrying only about the concept of noise scrambling the content of the message, regardless of if the meaning is still intact. It is considered by some to be too simple, with Chandler (1994) asserting that the model is "not merely a gross over-simplification but a dangerously misleading misrepresentation of the nature of human communication". And this is certainly a fair argument. Let us take for the sake of argument, the example of language. Say the Transmitter is speaking in French on a telephone connection that is crystal clear, and his message is received perfectly clearly by the Receiver, who is unable to speak French. According to Shannon and Weaver, the message can be classed as having been successfully sent, even though the receiver cannot speak French and therefore is unable to get any meaning out of the message. ...read more.

It is this element of interpretation that makes Newcomb much more suited in the field of International Relations than Shannon and Weaver or Gerbner. The added X element serves as a way of regulating the communication to help ensure that the interpretation of the Receiver is as intended by the Sender. But the X element is only as useful if one knows what it is. According to Fiske (1982) "This model assumes ... that people need information". Which is true. If one is not aware that a thumbs up is offensive to someone, they will not know to avoid it, meaning that being well informed is a must for the success of the model. Therefore in conclusion we can see that the Shannon and Weaver and Gerbner models of communications are sufficient if one wishes to take an academic, simplified look at communication and the way it works, but their lack of the necessary extraneous elements of communication make them next to useless in any real world scenario, representing, as they do, overly-simplified models of how communication works. Newcomb on the other hand is better suited for real world communication if only because of the added X element which ensures that interpretation can be controlled by either party, even if the X element can be rendered useless due to ignorance. ...read more.