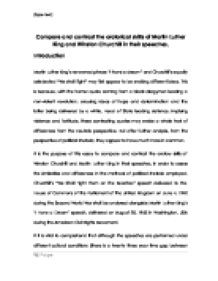 Compare and contrast the oratorical skills of Martin Luther King and Winston Churchill in their speeches.

Compare and contrast the oratorical skills of Martin Luther King and Winston Churchill in their speeches. Introduction Martin Luther King's renowned phrase "I have a dream" and Churchill's equally celebrated "We shall fight" may first appear to be evoking different ideas. This is because, with the former quote coming from a black clergymen leading a non-violent revolution, arousing ideas of hope and determination and the latter being delivered by a white, Head of State leading defence, implying violence and fortitude, these contrasting quotes may evoke a whole host of differences from the neutrals perspective. But after further analysis, from the perspective of political rhetoric, they appear to have much more in common. It is the purpose of this essay to compare and contrast the oratory skills of Winston Churchill and Martin Luther King in their speeches, in order to assess the similarities and differences in the methods of political rhetoric employed. Churchill's "We Shall Fight Them on the Beaches" speech delivered to the House of Commons of the Parliament of the United Kingdom on June 4, 1940 during the Second World War shall be analysed alongside Martin Luther King's 'I Have a Dream' speech, delivered on August 28, 1963 in Washington, USA during the American Civil Rights Movement. It it is vital to comprehend that although the speeches are performed under different cultural conditions (there is a twenty three year time gap between them, with this chasm being further widened by the fact that the political leaders have come from polarised social backgrounds) they are both in this case, vying for the same cause under Aristotle's three genres of rhetoric; deliberative, forensic and epideictic. This is because both speeches fall into the 'deliberative' category, whereby it is envisaged by Aristotle that; "The deliberative Rhetoric must exhort or persuade his audience, his speech is addressed to a judge of the future, and its end is to promote the good and avoid the harmful. ...read more.

He also spent time in a POW camp in South Africa. This first-hand experience adds to his knowledge and expertise on the subject and helps to establish the credibility of his argument. Moreover there is evidence of metal strength in his prose via mentions of "We shall fight... We shall never surrender" (19 line 13), thus demonstrating courage and integrity through a strong refusal to surrender. This feature, of using person experience to add to the persuasive appeal of the argument, is also prevalent in King's oration. This is because the fact that he himself is an African American, who has had first-hand experience of the segregation and discrimination towards black people, makes his argument much stronger. Numerous examples of his own personal experiences can be found in the text which other black people can relate to. Examples of this can be found in lines 70-74 and 81-84. In lines 103-105 in particular, King divulges in how own life, by making references to his children, in order to make the audience connect with his position as well as gain respect for him, as he possesses the title of father. Therefore because King presented to the people such real and visual examples of racism, many people finally began to look at the situation in another point of view. Both orators also employ the use of language that is appropriate to their audience and present a retrained, sincere, fair minded presentation. This demonstrates their reliability, competence and respect for the audience's ideas and values through reliable and appropriate use of support and general accuracy. Therefore both Churchill and King fully understood the power of ethos and were able to convey in their prose a respect for subject and audience, an intelligence and superior degree of knowledge. These combined to create enormous credibility for both leaders and their personal backgrounds also greatly contributed to their reputation and trustworthiness. ...read more.

In the satisfaction step, speakers tell listeners how to satisfy the need they establish. This can be found in lines 68-69. Then he tells listeners to go back home knowing their situation can and will be changed. For visualization, he offers listeners a vision of what life can be once their solution (offered in the satisfaction step) is adopted. This is where King offers listeners his dream: "I have a dream" offered along with five different descriptions of what life can and will be like in Georgia, Mississippi, Alabama, in communities, and around the world. This can be found in lines 94-112. The final stage is the action step when speakers offer listeners a specific course of action to follow. King's action step occurs when he asks his audience to "Let freedom ring," and he uses the phrase at the end of the speech focusing on eight states symbolizing the whole nation. By using this method, the structure of the speech is more coherent and this enhances the persuasive appeal of the argument. Churchill uses statistics in order to further illustrate his point. An example of this can be found in paragraph 9, line 2 where by using statistics he is able to further emphasise German strength. This is further highlighted via the depictions of the death toll and injuries severed by the British Army. Similarly, the references to religious scripture and American history made by King, which were assessed earlier in the ethos category, can also be applied here. Furthermore, King uses specific examples which illustrate his logical arguments. One way that Martin Luther King Jr. accomplishes this is to make numerous geographic references throughout the speech: These include references to Mississippi, Georgia and Alabama. Mississippi is mentioned on four separate occasions. This is not accidental; mentioning Mississippi would evoke some of the strongest emotions and images for his audience as this was where racism and segregation was strongest. Additionally, King uses relatively generic geographic references to make his message more inclusive and to unite his audience. Examples of this can be found in lines 86, 119, 141 and 142-143. ...read more.