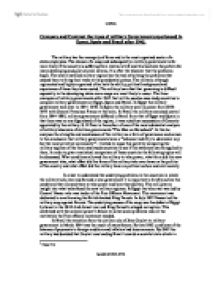 Compare and Contrast the types of military Government experienced in Egypt, Spain and Brazil after 1945

Compare and Contrast the types of military Government experienced in Egypt, Spain and Brazil after 1945. The military has the monopoly of force and is the most organized sector of a states employees. The chance of a coup and subsequently a military government is far more likely if the country is suffering from internal strife and this has been the pattern for many developing and post colonial nations. It is after the takeover that the problems begin. The newly installed military regime has the task of solving the problems that caused them to bring their tanks to the presidential palace. The military, although regimented and highly organized often lack the ability, political background and experience of those they have ousted. The military learn fast that governing is difficult especially in the developing states were coups are most likely to occur. The three examples of military governments after 1945 that will be used as case study countries to compare military government are Egypt, Spain and Brazil. In Egypt the military government took over in 1954- 1970. In Spain the military were in power from 1936-1975 with General Francisco Franco at the helm. In Brazil the military exercised control from 1964-1985, military government differed in Brazil from that of Egypt and Spain in that there was no one figurehead of the regime, it was ruled by a succession of Generals appointed by the military. S. E Finer is the author of one of the most substantial analysis of military takeovers of civilian governments "The Man on Horseback". In this he analyses the strengths and weaknesses of the military as a form of governance and comes to the conclusion that military governments have a "technical inability to administer any but the most primitive community"1. I intend to argue this point by comparing the military regimes of the three case study countries to see if this statement can be applied to them. ...read more.

The level of coercion employed in the case study countries is an important factor in proving the point that military governments provide "primitive communities". As coercion is often used as more basic form of control than mass public support for the regime. In Brazil immediately after the coup about a hundred leading politicians, trade unionists, members of the armed force who opposed the coup, congressmen, state governors and intellectuals were stripped of their political rights for ten years. Widespread dismissals arrests and expulsions took place in the local, state and federal administration. Up to 1977 the regime annulled the political rights of 4,682 citizens, including 1,261 military men, 300 university teachers, 50 state governors, 3 former presidents, diplomats judges, journalists, union leaders, pubic servants and ordinary workers. 6 This would clearly have an adverse affect against democratic rights. Torture and assassination were not an integral part of the regime in the early years, although several cases occurred, for example soldiers with known links to popular movements were tortured in army barracks. In 1965 the government under Castello Branco, in response to hard line elements in the military passed the first of the Institutional acts. These conferred special powers to the president. It gave the president power to override constitutional rights, it gave him the power to strip people of their political rights for ten years, revoke any elected mandate, disband any political party. This act also made the elections for president indirect and subject only to the vote of congress. This was later taken further by Branco's successor Coasta e Silva in 1967 with a new constitution that further increased the powers of congress and diminished those of congress. The regime in Brazil overtime became more oppressive. In 1967 wages were lowered by about 40 percent. In the face of growing shop floor militancy the government responded with ever increasing force. In a 3,000 person sit in in Sao Paulo in 1968 the strike was violently crushed by the regime, "During the following ten ...read more.

The regimes in Egypt and Spain are the two most authoritarian. Franco's regime was brutally repressive and although this was toned down in the later years of the government it still remained a very repressive police state. Egypt was different, although a repressive regime where members of WAFD and the Muslim brotherhood were violently suppressed it gradually moved toward a quasi-civilianised regime where these two organisations were again legal. In Brazil the form of oppression was different still people were largely stripped of their political rights as a form of suppression, torture and execution were rarely used in comparison to the other countries. Politically Franco's regime offered no participation for citizens which in turn created apathy and a subject political culture. Franco ruled as a King and even seemed to think of himself as one. Using royal traditions and customs. People felt they was nothing they could do to affect politics and were by and large apathetic. Nasser's regime was direct moved throughout all of Finer's classifications of military government in its life span. It was a dictatorial regime and political culture was definitely low during Nasser's reign. In Brazil an a reasonable level of was sustained, mainly because this gave the regime much needed legitimacy. There was civilian influence in policy making especially economic policy, also a civilian congress was retained and regular elections were held. I agree with Finer's assertion with regard to Egypt and Spain, these two governments did provide a primitive economy, both used force to retain control thus showing lack of legitimacy. Both used violent means to instil fear and prevent resistance. This had a serious effect on the political culture and civil society. Brazil on the other hand is an anomaly to Finer's assertion, it retained political culture and repression was very limited. The was also significant civilian representation in government. On balance I agree with Finer in that the majority of military governments provide a primitive community but Brazil shows that this is not always a given fact. Although politically even in Brazil the community was certainly more primitive than the democracy that proceeded it. ...read more.