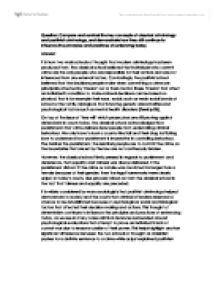 Question: Compare and contrast the key concepts of classical criminology and positivist criminology, and demonstrate how they still continue to influence the principles and practices of sentencing today. Answer: It is from two main schools of thought that modern criminology has been produced from. The classical school believed that individuals who commit crime are the only people who are responsible for their actions and are not influenced from any external factors. Contrastingly, the positivist school believed that the decisions people make when committing a crime are principally affected by 'means' out of their control. These 'means' that affect an individual's condition to make rational decisions can be based on physical, that is for example their race, social, such ...read more.

We only have to look a country like Bali and their drug trafficking laws to understand how punishment is imperative in controlling behaviour. The harsher the punishment, the less likely people are to commit the crime, so the boundaries that are set by the law are not continuously broken. However, the classical school firmly pressed in regards to punishment and deterrence, that equality and fairness was always delivered. If the punishment did not fit the crime or a male was convicted for longer than a female because of their gender, then the legal frameworks were clearly unjust. In today's courts, due process follows on from the classical school in the fact that fairness and equality are preceded. ...read more.

This helps highlight another significant difference between the two schools of thought as classicism pushes for a definite sentence to a crime while as just explained positivism pushes for an indefinite sentence looking to reform the individual rather than push only for deterrence. Interestingly when analysing both school of thoughts it is important to note that both forms of criminology primarily focus on the offender not the victim (Sullivan and Tifft p.440). Overall, it is clearly evident how crucial both classical and positivist criminology have been to the courts and their sentencing procedures. Without their influences, many forms of justice would be incoherent in the courts, for example punishments delivered by the courts could outweigh the crime committed and those that unfortunately suffer from psychological and biological disorders would be convicted without protest. ...read more.