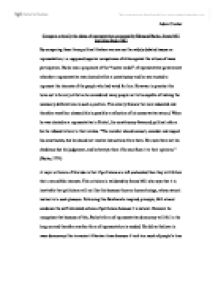 Compare critically the ideas of representation proposed by Edmund Burke, James Mill and John Stuart Mill By comparing these three political thinkers we can see the widely debated issues on representation, i.e. supposed superior competence of elites against the virtues of mass participation. Burke was a proponent of the "trustee model" of representative government whereby a representative was elected within a constituency and he was trusted to represent the interests of the people who had voted for him. However in practise this turns out to be very elitist as he considered many people not to be capable of making the necessary deliberations in such a position. This clearly favours the more educated and therefore wealthier classes (this is possibly a reflection of his conservative nature.) When he was elected as a representative in Bristol, his constituency favoured political reform but he refused to bow to their wishes. "The member should consult, consider and respect his constituents, but he should not receive instructions from them. He owes them not his obedience but his judgement, and he betrays them if he sacrifices it to their opinions." (Burke, 1774) A major criticism of this idea is that if politicians are left unchecked then they will follow their own selfish interests. This criticism is validated by James Mill who says that it is inevitable that politicians will act like this because they are human beings, whose natural instinct is to seek pleasure. ...read more.

J.S Mill believes that this should be a temporary measure as he wanted others to increase their education and competency over time and then plural voting could be scrapped. He called this developmental democracy which would enrich and advance the species. At least he wanted to make people more equal over time, Burke just assumes the working class will always be politically ignorant but if that's the case then why give them the vote at all, maybe so that it will still seem to them like they have a say in what happens to them, but in reality they cannot demand their representative to say what they want him to say. John Stuart Mill believed that there were "higher pleasures" and some people were better equipped to know what pleasure is than others. This seems to be the same kind of notion advocated by Edmund Burke, that the elected representative knew better than the people he represents. This seems very much like class rule, with Marx suggesting that the educational elites form a class of their own. If this is true then James Mill's thinking that people of a lower class can be fairly represented by those in a higher class is simply not true. This can be seen by Mill himself defying his constituency in Bristol when they demanded political reform but due to his conservative leanings and his desire to maintain the status quo, he refused to represent what they wanted. ...read more.

John Stuart Mill is either too na�ve of the motivations of the educated or he deliberately sets out to maintain the status quo in as much as he wants the power to stay in the hands of the rich and educated and out of the hands of the working class despite his apparent utilitarian upbringing. It could just be argued that he is maximising his utilities by acting self interestedly which is why his thoughts on representation aren't as philanthropic as they may seem at first. In any case, all three men are guilty of elitism. Their ideas may have seemed radical in their own times but they just cover the surface of their elitist views with some thoughts on participation of the masses which wouldn't give the working classes any power anyway. A stark contrast would be with Rousseau whose "entire political theory hinges on the individual participation of every citizen" (Pateman 1970) This form of representation upholds democracy whereas Burke, Mill and J.S Mill advocate aristocratic rule. Unless you were wealthy and educated, you would've had more representation in ancient Greece with their form of direct democracy where your views were actually heard as opposed to being watered down by supposedly more intelligent peers with their own agendas. Adam Crosher ...read more.