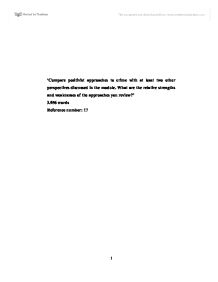 Compare positivist approaches to crime with at least two other perspectives discussed in the module. What are the relative strengths and weaknesses of the approaches you review?

'Compare positivist approaches to crime with at least two other perspectives discussed in the module. What are the relative strengths and weaknesses of the approaches you review?' 3.956 words Reference number: 17 Introduction Since the creation of human societies, crime made its appearance too and became an unavoidable phenomenon for every society. At the same time with the appearance of crime, a number of questions emerged as well. 'Why does crime exist?', 'What makes a person turn to crime?'. The answers to the above questions are pertinent to the explanation of crime. Understanding crime is essential not only because it presents the reasons that lead someone to break the law, but also because it determines the measures that must be taken in order to combat crime and the penal treatment of criminals (Alexiadis, 2004:44). Attempts to explain crime were made for a number of centuries. First attempts relied on religious structures and specifically on demonology. According to this explanation crime results from the influence of unworldly powers. Criminals were driven by forces beyond their control and the punishment inflicted on them was extremely severe and brutal (legislation was given the title 'the bloody code') (Department of Criminology, 2006/07:2-18). However, the 18th century constituted a period of immense change. Specifically in the late 18th and early 19th century, an intellectual activity emerged that it became known as the 'European Enlightment'. 'The Enlightment represented the development of human beings and their relationship with each other, institutions, society and the state' (Department of Criminology, 2006/07:2-15). During the 'European Enlightment' an explosion of writings occurred and progressively a variety of theories trying to explain the prevalence of crime came to the surface. It is important at this point to note that all these theories had tried to explain and not to excuse crime. Providing the reasons that prompt someone to actual criminal behaviour does not mean that they perceive crime as an acceptable behaviour. ...read more.

When the individual can neither retain balance between them nor resolve the conflict, then the unacceptable feelings and thoughts prevail and the individual presents abnormal social behaviour and consequently criminal behaviour (Alexiadis, 2004:59). Another significant psychoanalytical approach is Aichhorn's 'Latent delinquency' theory. 'Aichhorn (1925) argued that at birth a child has certain instinctive drives for which it demands satisfaction. The child is unaware of, and obviously unaffected by, the norms of the society around it. Aichhorn describes such a child as being in an "asocial state" and says that the task is to bring the child into a social state (1925:4). When a child's development is ineffective he/she remains asocial. If the instinctive drives are not acted out, they are suppressed and he/she is in a state of "Latent delinquency" (which could be translated into actual offending behaviour' (cited in Department of Criminology, 2006/07:3-31). The most obvious advantage of psychological positivism is that it stressed the effect that one's childhood can have on his/her future life. Moreover psychological positivists emphasised the neglected problems of 'Libido', which according to research, may lead someone to actual criminal behaviour (Patient, 2008). 'Libido' is the term used by Freud to label the sexual instinct, which he perceived as 'the basic and most powerful human drive' (Discovery Health, 2008). During the later stage of the development of Libido, one's psyche is made up of three components: 1) id, 2) ego and 3) superego. Psychological Positivists were more interested in the third component as it determines 'the learned and internalised social standards of behaviour, including an awareness of banned or punishable behaviours' (Discovery Health, 2008). Several factors, including mental illness, may prompt the loss of Libido and consequently lead to the loss of superego and the neutralisation of the 'deterrence mechanisms' (namely of the awareness of what is illegal) which can prevent one from exhibiting punishable behaviour. Nevertheless, while psychological positivist approach has shown itself to be of some significant value, it is subject to a number of criticisms. ...read more.

Conflict theory has had an important niche in criminology. This perspective attempted to identify the power relations in society and draw attention to their role in promoting criminal behaviour. Moreover, conflict theorists stressed that those who deserve to be punished (namely wealthy criminals) are actually punished the least, whereas those whose crimes are relatively minor receive the stricter punishments (Siegel, 2004:255). On the other hand, this view has not been exempt from criticism. There is little conclusive evidence that the criminal justice system has a tendency to show favour towards social elites and against poor (Siegel, 2004:258). For instance, socioeconomic status seems unrelated to the length of prison terms assigned by the courts (Siegel, 2004:258). Despite the weakness of this approach, it provides information on how social circumstances in a non-consensus society can lead individuals to break the law and thus it has become a predominant theory. Conclusion In conclusion, the approaches discussed above have tried to provide a universal explanation of crime and deviance. Biological and psychological positivist approaches perceive crime as the result of not normal behaviour. Positivism has made a significant contribution to the explanation of criminal behaviour and has shown a link between delinquency and abnormalities in an individual. The classical school of criminology proposes that individuals seek pleasure and attempt to avoid pain. As a result, a potential offender will refrain from committing a crime, if its costs outweigh the benefits. While the classical school claimed that crime is the result of rational choices made by offenders who were motivated by greed and selfishness, conflict theory argued that the motives for criminal behaviour are poverty and hopelessness (Siegel, 2004:258). The above mentioned theories, although they shed light to different factors that may lead to delinquency, they do not necessarily oppose each other. On the contrary, they may complement each other in certain areas and they do share the same aim: they try to identify the factors that can motivate someone into deviant and criminal behaviour. ...read more.