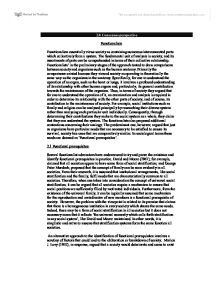 2.0 Consensus perspective Functionalism Functionalism essentially views society as containing numerous interconnected parts which collectively form a system. The fundamental unit of analysis is society, and its assortments of parts can be comprehended in terms of their collective relationship. Functionalists' in the preliminary stages of the approach tented to draw comparisons between society and organisms such as the human anatomy. Primarily the comparisons existed because they viewed society as operating in theoretically the same way as the organisms in the anatomy. Specifically, for one to understand the operation of an organ, such as the heart or lungs, it involves a profound understanding of its relationship with other human organs and, particularly, its general contribution towards the maintenance of the organism. Thus, in terms of society they argued that for one to understand the operation of it, an examination and analysis is required in order to determine its relationship with the other parts of society, and of course, its contribution to the maintenance of society. For example, social institutions such as family and religion can be analysed principally by researching their diverse system rather than analysing each particular unit individually. Consequently, through determining their contributions they make to the social system as a whole, they claim that they can understand the system. The functionalists also proposed additional contentions concerning their analogy. The predominant one, however, argued that just as organisms have particular needs that are necessary to be satisfied to ensure its survival, society has ones that are comparatively similar. In sociological terms these needs are deemed as 'Functional prerequisites'. 2.1 Functional prerequisites: Several functionalist advocators have endeavoured to try and prove the existence and identify functional prerequisites in practice. David and Moore (1967), for example, claimed that all societies appear to have some form of social stratification, and George Peter Murdock, proposed that the concept of family can be seen evidently in all societies. ...read more.

In terms of the superstructure he claimed that it was influenced and shaped by the infrastructure. For example, the political, legal and educational institutes and the belief and value systems are principally determined by economic factors. A major change in the infrastructure consequently will result in a change in the superstructure. He claimed that all societies experience forms of exploitation by its members. In a capitalist society, for instance, Marx would have maintained that the employers exploit the subordinates. This, in turn, encourages group conflict as one gains at the expense of another. As a result, the conflict has to be resolved as a social system cannot survive unchanged if it contains contradictions. He maintained that the predominant contradictions in society are between the forces (e.g. land, raw materials, tools and machinery and the scientific and technological knowledge used in the production process) and relations of production (i.e. the 'relations of production' are the social relationship which individuals enter into in order to produce food). Marx viewed the means of production as consisting of the parts of the forces of production that can be legitimately owned. They thus include law, raw materials, machinery, buildings and tools, although, this does not technological or scientific knowledge. The notion of contradictions between forces and relations of production can be highlighted in terms of the infrastructure. Marx held that only labour generates wealth, hence, in the capitalist society, wealth is produced by the labour. However, an abundance of this wealth is received by the capitalists - the owners of the means of production. The subordinate workers, conversely, are underpaid and receive insignificant value for the income they generate. Therefore, there is an evident contradiction between the forces of production and the relations of production. He believed that the conflict between capital and labour could not be resolved inside the framework of a capitalist economy itself. 3.2 Contradictions and change: Marx had a view of history as being divided up into several periods or epochs, each being characterised by a particular mode of production. ...read more.

for example asserts, 'interactionists large fail to explain why people consistently choose to act in given ways in certain situations, instead of in all the other ways they might possible have acted'. The approach also fails to sufficiently explain why standardised normative behaviour occurs and why individuals of society are influenced by social norms. * Critics have also argued that interactionists fail to explain the source of meanings to which they attribute such significance. In terms of labelling, for example, they fail to explain the origins of the means that are attached to particular individuals. Structural supports have argued that such meanings are not impulsively formulated in interaction situations rather they are systematically formed by the social structure. * The approach, some European critics have argued fails to take into consideration cultural ideas of societies this side of the Atlantic. Action paradigm analysis of religion The action perspective holds that religion is socially constructed and that it is one the main mechanisms in society where individuals can make sense of their life. It is constructed with symbolism and rituals. Thus, through various rituals, individuals develop the distinction between the sacred and profane. John J. Macionis argues 'by placing everyday events within a cosmetic frame of reference people confer on their own fallible, transitory creations 'the semblance of ultimate security and performance'. Marriage for example, may be primarily a contact between two people and one could assume that it can end when the individuals want it to. However, if partners define their relationship as holy matrimony, the bond will be far deeper. This fact can be seen evident in most societies as divorce rates are lower amongst religious people. In situations where humans are confronted with insecurity or uncertainty, they bring sacred symbols to the fore. By bringing sacred symbols into particular situations; individuals are able to get over serious setbacks and predicaments. In contemporary sociological research interactionalists have researched newer religions such as scientology to find out how they give people meaning in a world which can often be irrational and stressful (Loftland, barker, respectively) . ...read more.