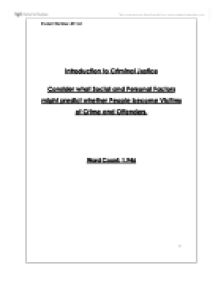 Consider what Social and Personal Factors might predict whether People become Victims of Crime and Offenders.

Introduction to Criminal Justice Consider what Social and Personal Factors might predict whether People become Victims of Crime and Offenders. Word Count: 1,946 This essay is going to discuss and examine the personal and social factors which contribute towards someone becoming a victim and an offender. There is a vast amount of factors that can influence someone conducting in criminal behaviour or contributing towards someone becoming a victim, but due to the limitations of this essay only four factors will be discussed, these being someone's geographical area, their socio-economic status, their gender and their age. Also as there are so many crimes that someone can fall a victim to or commit, this essay is only going to talk about these factors in relation to the crimes of domestic burglary, personal theft or robbery and violent crime. This essay also hopes to demonstrate how these four factors not only link with all of the discussed crimes but that the factors also link with each other. These factors come from many different branches from a various amount of subjects such as psychology, sociology and social-biology, but many of these are based on theories conducted through academic research (Jones,2006). This essay is going to discuss these factors in a more scientific and mathematical manner by using information deprived from statistical evidence from official statistics, such as police records, and from victimization surveys, such as The British Crime Survey. This essay is also going to use research conducted by The Home Office and other governmental agencies. ...read more.

This is mainly down to the high number of technical possessions students and young people possess, such as laptops, mobile phones and IPods. Research conducted by Harrington and Mayhew (2002) showed that a rise in phone robberies was greater than any other street robbery, with street robbery being one of the most violent forms of personal theft. The majority of those that fall victims to street robbery are males at 76% with 45% of those aged 20 or under, and those that commit these crimes are also male making up 96% of suspects with approximately 50% being under 20 years old (Smith, 2003). This again shows a common link between offenders and victims, and Smith (2003) found that since 1993 the age of victims has been getting lower, down to as young as 11 years old and that the age of the offender has also correlated to this. This again is linked to lifestyle and social status as those from a lower class background would be those that are populating the streets at night, due to not having much to occupy them at home or wanting to be with their peers. Being with their peers can also contribute towards someone being more inclined to commit a street or personal robbery as 62% of all recorded robberies consisted of two or more suspects, and these seemed to pray on younger male victims compared to them committing the crime their self. Violent crime can be linked to many other categories of crime, including domestic burglary and street robbery. ...read more.

The risk of our geographical area has shown that those areas that are populated by young, single professionals or those consisting of single parents and unemployed members of society are at a higher risk of many different forms of crimes. Much to the public's belief, which is largely influenced by the media portraying the crimes that would shock society the most such as young males violently assaulting an elderly women or a young female attacked and assaulted by a family member, of the most vulnerable and victimized members of society being females or the elderly, this essay has shown that in fact those most at risk are young males, which has shown that although young males are more associated with committing crimes, they are also their own main victims. The statistics for female victims and offenders do correlate with each other in the relationship that they are both low in numbers but this could be down to many females not wanting to report their crimes or criminal justice agencies being too soft on them and not arresting and charging them as much as they do to males. As it stands this essay has concluded that the typical offender of the crimes it has discussed is a young male aged 16-25 years old and from a low socio-economical background and a typical victim of these crimes is the same. Therefore more crime prevention manners could be put into place in order to reduce the risks and factors involved in becoming the typical victim and offender, or maybe more means need to go into measuring crime accurately as there seems to be a low representation of female victims and offenders. ...read more.