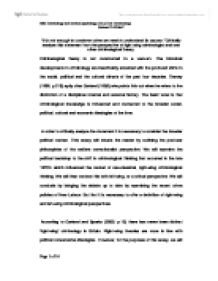 Criminology. Its not enough to condemn crime we need to understand the causes.

"It is not enough to condemn crime we need to understand its causes." Critically analyse this statement from the perspective of right wing criminologist and one other criminological theory. Criminological theory is not constructed in a vacuum. The historical developments in criminology are inextricably entwined with the profound shifts in the social, political and the cultural climate of the past four decades. Tierney (1996, p.218) aptly cites Garland (1985) who points this out when he refers to the distinction of a disciplines internal and external history. The basic tenet is that criminological knowledge is influenced and connected to the broader social, political, cultural and economic ideologies of the time. In order to critically analyse the statement it is necessary to consider the broader political context. This essay will situate the reader by outlining the post-war philosophies of the welfare correctionalist perspective. We will examine the political backdrop to the shift in criminological thinking that occurred in the late 1970's which influenced the revival of neo-classical, right-wing criminological thinking. We will then contrast this with left-wing, or a critical perspective. We will conclude by bringing the debate up to date by examining the recent crime policies of New Labour. But first it is necessary to offer a definition of right-wing and left-wing criminological perspectives. According to Garland and Sparks (2000, p.10) there has never been distinct 'right-wing' criminology in Britain. Right-wing theories are more in line with political conservative ideologies. However, for the purposes of this essay, we will define right-wing perspectives as those that have common distinctive features that unify them as a commitment to pragmatic approaches and policy developments with less interest in armchair theorising and critical analysis. Right-wing criminological perspectives encompass neo-conservative and administrative rationalities. Neo-conservative rationalities call for the return to traditional values and norms of society. They condemn crime vigorously, as deviation from human morals with a lack of self-control and self-regulation as the cause. ...read more.

Contemporary capitalist society invites high crimes rates by increasing numbers of portable possessions. Also, people are more likely to be away from their homes thus reducing the number of guardians. Situational crime prevention is simply concerned with reducing the opportunities for crime. This is achieved by localised strategies to change the immediate environment and increased surveillance (Clarke, 2001, pp.357-366). A related strand of right-wing neo-classical theories is administrative criminology. Administrative criminology is a product of the direct research carried out by the Home Office and is thus characterised by its commitment to the new-right politics. This is the embodiment of orthodox, establishment criminology, or what Garland terms the governmental project (Garland, 1994, p.18.). Felson and Clarke's (1998) Opportunity Makes the Thief, is a brief but influential thesis commissioned by the Home Office. It is symbolic of right-wing theories as it appeals to common-sense. Felson and Clarke insist that criminology need no longer be concerned with abstract theorising. Attempts to discover causal relationships do not deal with the here and now of everyday life. The implication is that discussion of demographic or socio-economic factors are of little consequence for those engaged in the hard reality of controlling crime. For Felson and Clarke (1998) the root cause of crime is opportunity. By accepting this common-sense notion they can deal with the crime problem immediately, simply and cheaply by opportunity reduction. Another perspective from the right contains elements of control theory combined with the Lombrosian positivist tradition. For example, Murray's later criminological theory has been recast as neo-positivism (Young, 1994, p.98). The basic principle is that both biological and conditioning factors play a role in the individual's ability to assess rewards and punishments. The punishments are not those that the state may impose, but the internalised conscience that the individual has learnt from the family. The conclusion is that biology sets the person at risk of becoming criminal while the lack of socialisation contributes (Young, 1994, p98). ...read more.

It appears that once in the grip of popular punitiveness, New Labour have taken the draconian measures of the Thatcherite authoritarian rule to new extremes. Being 'tough on crime and the causes' seems to equate to simply being tough, mostly on recalcitrant and unruly youths. Nonetheless, no one can accuse New Labour of being soft on crime. Profound cultural and political changes over the past four decade have changed criminology irrevocably. The cultural shift from social welfare forms of governance to a neo-liberalism which emphasises the individual as the responsible agent of their own security has meant that a criminology espousing welfare rationalities will have little to offer government and policy makers. As governments adopt a populist punitiveness stance there is a growing gap between criminological knowledge and public policy. Instead, policy is based on highly political articulations of public sentiments (Garland & Sparks, 2000, p.12) Right-wing conservative criminological research that is embodied in the administrative criminology of the Home Office is curiously absent of qualitative studies into the causes of crime. The imperative appears to be devoid of critical analysis of the structure of society. Instead, it offers numbers and statistics that whole heartedly condemn the misery of crime. Yet there is a distinct absence of research into the misery of the causes. Furthermore, the current political trend of popular punitiveness especially targets children and young people. Getting 'tough on crime' and antisocial behaviour means use of civil injunctions, particularly ASBO's that serves to further exclude communities already marginalised by poverty and unemployment. Communities continue to be targeted in neighbourhoods devastated by endemic poverty and structural unemployment. In these areas of exclusion, New Labour appeals to responsibilization and thus expects active civic citizenship from individuals whose lives revolve around survival, exclusion and economic marginalisation. Finally, the nature of criminal motivations cannot be ignored. A better understanding of the fight against inequality, injustice, oppression and greed may offer insights into the root causes of criminality. Perhaps it is time for politicians, criminologist and society to understand a little more and condemn a little less. ...read more.