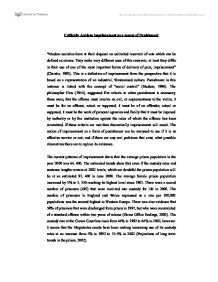 Critically Analyse Imprisonment as a means of Punishment.

Critically Analyse Imprisonment as a means of Punishment "Modern societies have at their disposal an unlimited reservoir of acts which can be defined as crimes. They make very different uses of this reservoir, at least they differ in their use of one of the most important forms of delivery of pain; imprisonment" (Christie, 1993). This is a definition of imprisonment from the perspective that it is based on a representation of an industrial, Westernised culture. Punishment in this instance is linked with the concept of "social control" (Hudson, 1996). The philosopher Flew (1954), suggested five criteria to when punishment is necessary, these were; that the offence must involve an evil, or unpleasantness to the victim, it must be for an offence, actual or supposed, it must be of an offender, actual or supposed, it must be the work of personal agencies and finally that it must be imposed by authority or by the institution against the rules of which the offence has been committed. If these criteria are met then theoretically imprisonment will result. The notion of imprisonment as a form of punishment can be analysed to see if it is an effective service or not, and if there are any real problems that exist, what possible alternatives there are to replace its existence. The current patterns of imprisonment show that the average prison population in the year 2000 was 64, 600. The estimated trends show that even if the custody rates and sentence lengths remain at 2002 levels, which are doubtful the prison population will be at an estimated 91, 400 in June 2009. ...read more.

However this is quite an extreme view and since the death penalty has been abolished in this country such ideals may be difficult to enforce. Now that some of the purposes or views have been established for imprisonment, the extent to its effectiveness can be analysed. Lord Falconer, the Minister of State for Criminal Justice, Sentencing and Law Reform has praised prison. The figures show that there was a 200% increase in the number of prisoners entering effective drug treatment. There has been an increase since 1997 of prisoners completing the offending behaviour programmes. The average time that the prisoner spends on purposeful activity per week is rising. There have been 4,664 completions of offending behaviour programmes, which have exceeded the KPI targets of 3,600 in the years 1999/2002. The percentage of prisoners that have tested positive for drugs under Mandatory Drugs Testing has gone down by 4.1%. The prison service has also gained a good relationship with stakeholders such as The National Probation Service, which concentrates on the offender's life after prison, The Youth Justice Board, which focuses on educating juvenile prisoners. It also has strong links with The Voluntary Sector and The Private Sector. Lord Falconer also displayed an understanding that because the prison population is rising and because more people are being sentenced for longer, there is a greater need to cater for these groups in society. Lord Falconer stated that "used properly, prison does work- and work to change prisoners' lives for the better" (Home Office, Prisons, 2000). ...read more.

These are just two out of several responses that have been made to the ever increasing problem of imprisonment. Based on the evidence put forward it appears that the intentions and purposes of putting people in prison are quite strongly understood. To be imprisoned is for reasons of retribution, incapacitation, deterrence and the possible notion of rehabilitation. These reasons stand out clear, but the problem that exists, is that the purposes of imprisonment are not being fulfilled. There is some evidence that prison is effective in that the figures show for example, that less people are testing positive for drugs, however most of the positive aspects of imprisonment are associated with promises and targets. There is a high political stance on the effectiveness of imprisonment as a form of punishment, with the Government wanting the public to feel safe and to have faith in the system. However, the truth is that the "crisis" of the prison system is not being dealt with in an efficient manner and the evidence has been put forward to confirm this. With the prison population rising, the conditions are worsening and the general tension becoming more apparent there are definite problems with this particular system of punishment. There are alternatives procedures which could be used to improve some of the areas of weaknesses; however, there will still be the need for an update in resources to cope with the expected demand that will be upon the imprisonment process. Once this has been achieved then the purpose for which it was established will maybe able to fulfil its duty. ...read more.