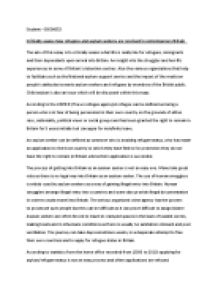 ﻿Student:- 08006652 Critically assess how refugees and asylum seekers are received in contemporary Britain The aim of this essay is to critically assess what life is really like for refugees, immigrants and their dependants upon arrival into Britain. An insight into the struggles and horrific experiences in some of Britain?s detention centres .Also the various organisations that help to facilitate such as the National asylum support service and the impact of the media on people?s attitudes towards asylum seekers and refugees by members of the British public. Child asylum is also an issue which will be discussed within this essay. According to the UNHCR (The un refugee agency)A refugee can be defined as being a person who is in fear of being persecuted in their own country on the grounds of either race ,nationality, political views or social groups and has been granted the right to remain in Britain for 5 years initially but can apply for indefinite leave. An asylum seeker can be defined as someone who is awaiting refugee status, who has made an application to the host country to which they have fled to for protection they do not have the right to remain in Britain unless their application is successful. The process of getting into Britain as an asylum seeker is not an easy one. Many take great risks as there is no legal way into Britain as an asylum seeker. The use of human smugglers is widely used by asylum seekers as a way of gaining illegal entry into Britain. Human smugglers arrange illegal entry into countries and some also provide illegal documentation in order to assist travel into Britain. ...read more.

Tindyebwa served as a child soldier in Rwanda against his will. He did however manage to escape with help from a local charity. He met Emma at a refugee council party in England they got talking and subsequently she invited him over for Christmas. From that moment on he formed a close bond with the family and they decided to adopt him. He was granted leave to remain by the home office and went on to study politics and sociology at Exeter University where he graduated in July 2009 with a 2:1 grade. He came to Britain with nothing and found success. (Alison Boshoff online,2008). A study was conducted by Porter and Haslam(2005) the purpose of this study was to assess mental health issues among adults and children who had been detained in immigration centres. It was reported that there was high volumes of psychopathological disorder (mental distress and abnormal behaviour) found in asylum seekers. The study compared asylum seekers and refugees to non-refugee groups and clear evidence suggests that mental illness is present more in asylum seekers and refugees who have been previously detained. The stress of the process of asylum together with the uncertainty of how long they will be detained for and the uncertainty of the future is a contributing factor to their mental state. Arriving in England can be a very lonely experience. However there are many support and advice organisations set up in order to assist asylum seekers such Asylum Aid a support service provided by the Red Cross. The service is designed to assist and inform asylum seekers and refugees of their rights in Britain and to make them aware of any financial support that they may be entitled to. ...read more.

The Asylum process in Britain is ever changing new rules and laws are introduced and the process can be quite lengthy and daunting to some. There is a great need for more positive exposure surrounding the area of asylum and refugees. Detention centres definitely need some kind of strict regulatory processes put in place to protect the detainees, some of the practices that go on inside immigrant detention centres are illegal and should be put to a stop. However the British society views asylum seekers and refugees they should not forget that they are human beings just like the British population and are entitled to help and protection especially when they are in fear of their lives and in a lot of cases are facing death in their country. Again this lack of understanding is because the tabloids are forever reporting the disadvantages of refugees/asylum seekers and neglecting to report on the positives. Of course Britain has limited funds like anywhere else in the world and this is why the application process is so tuff not all asylum seekers are accepted into Britain an often they are returned to the country they fear the most. Many asylum seekers do want to work and in desperation have found jobs illegally in Britain so if the law was changed they could put back into Britain in the form of taxes. The support systems that are put in place to support asylum seekers are much needed as guidance is prevalent as when arriving into Britain often they do not know what to expect, or who to ask for help. That friendly face makes all the difference to their already mental state. ...read more.