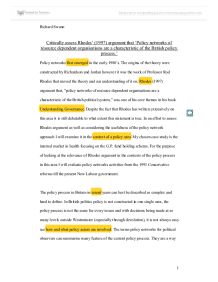 Critically assess Rhodes' (1997) argument that 'Policy networks of resource dependent organisations are a characteristic of the British policy process.'

Richard Swann Critically assess Rhodes' (1997) argument that 'Policy networks of resource dependent organisations are a characteristic of the British policy process.' Policy networks first emerged in the early 1980's. The origins of the theory were constructed by Richardson and Jordan however it was the work of Professor Rod Rhodes that moved the theory and our understanding of it on. Rhodes (1997) argument that, "policy networks of resource dependent organisations are a characteristic of the British political system," was one of his core themes in his book Understanding Governance. Despite the fact that Rhodes has written extensively on this area it is still debatable to what extent this statement is true. In an effort to assess Rhodes argument as well as considering the usefulness of the policy network approach I will examine it in the context of a policy area. My chosen case study is the internal market in health focusing on the G.P. fund holding scheme. For the purpose of looking at the relevance of Rhodes argument in the contexts of the policy process in this area I will evaluate policy networks activities from the 1991 Conservative reforms till the present New Labour government. The policy process in Britain in resent years can best be described as complex and hard to define. In British politics policy is not constructed in one single area, the policy process is not the same for every issues and with decisions being made at so many levels outside Westminster (especially through devolution), it is not always easy see how and what policy actors are involved. The terms policy networks for political observers can summarise many feature of the current policy process. ...read more.

GP's had previously been providers of health care but through the 1991 reforms some GP's were given the chance to set up budgets through which they could purchase non-emergency secondary health care services for their patients rather than having their funds controlled by a local health authority. The policy networks in health before the Conservative reforms of the early 1990's can best be best described as policy communities with the exclusions other actors being common and a strong stable consensus within the networks. Smith (1993, p165 sited in Kay 2001) viewed the relationship between the post war governments and medical profession as a "closed policy network." However with the professional emphasis of the NHS, which was also present in the networks, through Rhodes five categories of networks model they may be better described as professional networks. Professional networks are very similar to a policy communities the main difference being professional networks have only one profession within the network and through the network they serve the interests of the profession. The British Medical Association (BMA) is a pressure group that enjoyed insider status and was the main policy actor alongside the government in the post war policy communities that dealt with health policy. The main reason for their close involvement was because of the specialist knowledge and experience of practice the medical profession can give to the formation of health policy, while still remaining political neutral. According to the BMA official website (www.bma.org.uk/ap.nsf/content/splashpage) the BMA is the professional association for doctors and represents all branches of medicine all over the UK and is 'the voice of the profession.' The vast majority of doctors are members of the BMA. The Department of health, BMA and Royal colleges representing consultants were the main policy actors in the policy communities in health. ...read more.

and private sector and not just by Westminster, which results in decisions in areas that can not be accountable to the public. The Conservatives fragmentation of the system that delivers public services resulted in changes in policy networks. These included the creation of new networks and through the use of both the private and voluntary sector new member's of networks both which resulted in changes in implementation of policy. In conclusion policy networks of resource dependent organisations are characteristic of the British policy process. The network perspective is a useful tool for looking at how actors interact in the policy process and simplify the complex relations and interchanges that take place. Although parts of Rhodes policy network approach can be seen as incomplete with lack of theory on the formation and change of networks through his power dependency model the way policy actors interact is brought to life. As was shown in the case study of the internal market in health without policy networks the British policy process is less informed and lacks legitimacy. Policy networks are part of the move away from the Westminster model towards a differentiated polity. They show how public and private organisations away from central government contribute to the creation and implementation of policy. The Thatcher period of government abandoned proper consultation and negotiation between policy actors and the government through methods such as policy networks. This resulted in implementation problems which were shown in the GP fund-holding scheme and shows why policy networks are an important part of the British policy process. However although there is a clear use of policy networks in the policy process elected government does have the final say and can alienate and exclude the use of networks and policy actors at all stages of the policy process. ...read more.

This essay is too waffly. It comes across that the author has struggled to fill the required word count and has therefore padded it with unnecessary repetition. It is far better to be concise and under the word limit than to try to hit the limit with irrelevance.

This essay is also a lesson in why spellcheck is not enough! You need to proof read your work. This is littered with errors that wouldn't be picked up by spellcheck (sited/cited, peruse/pursue, and all sorts of misplaced apostrophes, incorrect tenses, etc). it is sloppy and lazy. If you can't be bothered to read your work, why should the marker?

Structurally it is quite weak. There do appear to be themes within the essay (description of Rhodes model, case study, models of the state, etc) but there isn't enough internal linkages to make it clear what purpose each serves. For an essay this length, subheadings can be useful, and as a minimum a clear introduction spelling out the sequence of the essay is a necessity.

The essay also relies very strongly on Rhodes (1997). Although this is part of the title, a more sophisticated understanding would discuss Rhodes' other work and how his theories might potentially have changed.

There is also not much consideration of the counter-factual. A stronger section outlining and discussing the Rhodes model, with critiques, would have allowed for a deeper case study. As it is, the case study presents no alternative readings of the structure of health governance, thus perpetuating the exact critique Dowding makes of Rhodes, that the policy network approach is just a narrative with no real testability.