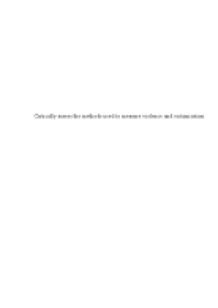 Critically assess the methods used to measure violence and victimisation

﻿Critically assess the methods used to measure violence and victimisation Executive Summary This report explored, critically assessed and identified limitations of two methods official statistics and victimisation surveys that measure violence and victimisation. Official statistics provide information on selected and reported crimes made by criminal justice agencies usually police but does not provide data about unreported crimes, characteristics of victims and offenders, making official statistics unreliable. The issues of unreported crimes are considerably high ranging from 40 ? 60 %. Several factors contribute to this high rate of under - reporting crimes like insignificance, personal perceptions, circumstances, fear or embarrassment. Other limitations include: over ? reporting and reporting only most serious crimes that may mislead societies about real extent of committed crimes. Victimisation surveys provide information about the crimes that are not reported to the police and not recorded in the official data. They gather information about victims and offenders such as impact of crime, relationships between victims and offenders, circumstances and reasons why crimes are not reported. However they are in limited scope and do not provide a final measure of the total numbers of crimes as they gather information only on certain crimes and certain groups while excluding others. Other limitations include: under ? reporting because people might be reluctant to disclosure information or too embarrassed, as well as over ? reporting because people might misinterpret events considering themselves as victims while they are not. ...read more.

or because of fear of reprisal (18 %) (Skogan, 1975). Others fail to report crimes because they feel that it is too embarrassing, for example crimes like rape or sexual assault have the highest non reporting rates (88 %) (Landau, 2006). Furthermore crimes are not reported because victim may not realize that she or he is a victim of a crime, for example in the event of fraud or when victims are children. This might happen because children may either fail to recognize themselves as victims, are too scared or cannot report it. For example children that are sexually assaulted usually are too scared or threatened to tell their experience to somebody (Cleaver et al., 2009). Because a lot of victims do not report their experiences to the police the official statistics that are gathered underestimate the number of committed crimes and the number of offenders of crime, leaving a huge gap between actual numbers of committed and reported crimes (Regoli & Hewitt, 2008). Other limitations of official statistics are that some crimes can be reported more than others or there might be events when police record more particular crimes than usual, for example more drunk drivers or more robberies at holiday season. Moreover official statistics report only the most serious crimes (rape, murder, homicide) ...read more.

Moreover because police officers can freely decide whether to report an event as a crime or drop it, these individual perceptions and decisions can influence the number of crimes that are recorded. Furthermore sometimes particular crimes can be over reported for example recording more thefts on Christmas and can cause a perception that particular crimes are increasing while others decreasing, while true extent of crime remains unknown. On the other hand victimisation surveys are created to address official data and its issue of unreported crimes. They cover a much broader range of information than official data for example impact of crime on victims, circumstances, characteristics and relationships. However like official statistics victimisation surveys have few limitations as well. One of them is that surveys are in limited scope because they focus only on a certain types of crimes (those where victim can be identified), while other crimes for example ?victimless crimes? or murder are excluded. Victimization surveys gathered data might be subject to under - reporting because numbers can be influenced by respondent?s reluctance to answer questions, as well as bad memory, fear or embarrassment that can make statistics unreliable. Additionally victimisation surveys might be subject to over reporting when people misinterpret events. Then data will over report crimes misleading about real trends of crime. Finally victimization surveys are conducted in households and they gather information from a group of people that do not represent whole population, making it difficult to measure the true extent of committed crimes. ...read more.