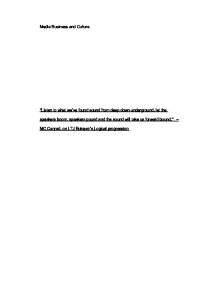 Critically discuss in detail the rise and fall and (if applicable) legacy of one youth culture and its musical association - Drum and Bass, Jungle.

Media Business and Culture ''Listen to what we've found sound from deep down underground, let the speakers boom, speakers pound and the sound will take us forward bound.'' - MC Conrad, on LTJ Bukeum's Logical progression Critically discuss in detail the rise and fall and (if applicable) legacy of one youth culture and its musical association. Youth culture: Junglists. Musical association: Drum and Bass, Jungle. JUNGLIST (jun*gul*list) n. 1) A male or female who regularly listens to drum & bass/ jungle music. Junglists are also very aware of breakbeat culture practicing most traditions in & around breakbeat & hip- hop culture (i.e. graffiti, breaking, mc'ing, dj'ing). Junglists are very bias towards Jungle/drum & bass. < Source Urbandictionary.com> The above definition is a crude outline of just what a Junglist is but it does mention two crucial elements the bias or elitism for the music and the importance of the breakbeat not just for its aural qualities but for its symbolism as well, the average age of a junglist ranges from 16 to 30 and unlike most forms of music it seems to have broken down the colour barrier having a fairly even distribution racial representation at drum and bass events. Properly defining Junglists as a youth music culture is virtually impossible without first defining an array of other youth cultures from jazz to hip-hop. Choosing to (much like the music itself) sample the 'best bits' from a variety of other previous music cultures. ...read more.

Styles of Drum and Bass are constantly emerging from the recent success of tracks such as Mindmachine's 'Barcelona' (Track 06) and Brazillian DJ Marky's chart entering 'LK' South American sounds are the latest adoption of drum and bass culture. Rise (Mid- 90's) 1994 was when jungle truly gained its own style when DJs concentrated on perfecting their use of breakbeats. One of the first jungle labels was created by DJ Hype, DJ Zinc and Pascal called Ganja Records (www.junglevoodoo.com). Releasing the seminal track 'Super Sharp Shooters' (see track 07). While the Ganja Records crew were perfecting Jump-up Jungle LTJ Bukeum was busy with a completely opposite, 'Intelligent' Drum and Bass, with soft synth washes and up-tempo amen breaks jungle was now also able to satisfy neurologically as well as physically. (See LTJ Bukeum Track 08, Atlantis) Junglists Its around this time that Junglists as a social group can be seen as coming into their own shedding off the baggage of the Hardcore rave crowd and adopting a new set of stereotypes: Mid-90's Raver stereotypes Mid-90's Junglist stereotypes Dress: Bright Colours Dress: Dark, Camouflage Drugs: Ecstasy, Acid Drugs: Cannabis Attitude: Happy Attitude: Serious Originally, many of them were "British b-boys who'd gotten swept up in the hardcore rave scene; others came from the reggae sound-system subculture of the eighties, whose music policy ran the spectrum of imported 'street sounds' from dub and dancehall to electro and rap" (Reynolds, 1998, p. 255). Controversy over the origin word Junglist has raged for years, but it probably comes from the term used to describe inhabitants of Tivoli Gardens in Jamaica or 'The Concrete Jungle' (Duffield, 2003 p. ...read more.