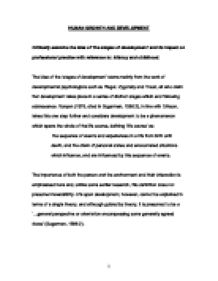 Critically examine the idea of the stages of development and its impact on professional practice with reference to: infancy and childhood.

HUMAN GROWTH AND DEVELOPMENT Critically examine the idea of 'the stages of development' and its impact on professional practice with reference to: infancy and childhood. The idea of the 'stages of development' stems mainly from the work of developmental psychologists such as Piaget, Vygotsky and Freud, all who claim that development takes place in a series of distinct stages which end following adolescence. Runyan (1978, cited in Sugarman, 1986:2), in line with Erikson, takes this one step further and considers development to be a phenomenon which spans the whole of the life course, defining 'life course' as: the sequence of events and experiences in a life from birth until death, and the chain of personal states and encountered situations which influence, and are influenced by this sequence of events. The importance of both the person and the environment and their interaction is emphasised here and, unlike some earlier research, this definition does not presume irreversibility. Life span development, however, cannot be explained in terms of a single theory, and although guided by theory, it is presumed to be a '...general perspective or orientation encompassing some generally agreed views' (Sugarman, 1986:2). Theories of childhood are hugely dominant within, and inform, education, social work practice, health, and the media. However, the current dominant approach to understanding early socio-emotional and personality development is attachment theory (Thompson, 2000). The psychiatrist, John Bowlby, originally formulated the concept of attachment theory and asserted that attachments to others are instinctive or 'innate', and are important throughout the life span (Kagan, 1984). This study will examine the concept of attachment, its impact on the development of the infant and the relevance of good early attachments for later healthy functioning. Encompassed within this will be an examination of the nature of resilience and individual differences in attachment behaviours. The contribution of attachment theory within professional practice will also be considered throughout, along with critical analyses from feminist, Eurocentric and social constructionist perspectives. ...read more.

studied Romanian orphans adopted in the UK and found that a later adoption age led to slower progress, thus concluding that a longer experience of privation can result in a longer recovery period. Rutter (1981) concluded that delinquency and disturbance were most commonly found in children who had been reared in unhappy homes, regardless of whether the home was 'broken' or whether the children had suffered from maternal deprivation. He argued that the juveniles that Bowlby had used in his study had never been looked after by their families and that nothing had been taken away from them, therefore they could not be seen as 'deprived'. Rutter (ibid) also pointed out that Bowlby's theory denies the opportunity to reverse the effect of negative early experiences, equally feeling that positive experiences in early life do not necessarily protect a child from later emotional damage (cited in Crawford & Walker, 2007). Indeed, Bowlby's theories of attachment and maternal deprivation have been criticised on a number of levels. His methodology is questionable in terms of unrepresentative samples and the use of a retrospective case study method. The concept of 'monotropy' has also been questioned as to its cultural validity. Does attachment theory apply universally because it is an innate concept or is it culturally bound? Generalisations about 'ideal' attachment behaviour or patterns tend to be made in a Eurocentric context. Studies conducted on infants in Northern Germany, Japan and those in Kibbutz care in Israel found that attachment theory could not be reliably applied cross culturally (Goldberg, 2000). Grossman et al (1985 cited in Goldberg, 2000) found that German mothers value early independence and hence see avoidant attachment as the 'ideal' rather than the universally accepted preference for secure attachment patterns. In theory German parents like to keep a greater parental distance than American parents, preferring a child who obeys and does not question. Research has found that there is no evidence that the larger number of anxious/avoidant German children is because German mothers are unresponsive, indifferent or insensitive but rather they merely value and thus nurture, independent children. ...read more.

Recognising that secure attachment relationships are a huge contributor enabling people to explore the world during all stages of life, but also appreciating the adaptability and flexibility of the human being to adjust to different circumstances is necessary. The evidence reviewed here has found mixed results despite seeming to suggest that a secure attachment during infancy is more likely to produce positive later outcomes. However, consistently the research questions whether later outcomes are actually the result of a secure infant attachment relationship, or whether they are related to other variables such as infant temperament and stable family and environmental circumstances, including the emotional availability and mental health of the mother. Overall, the evidence seems to be that whilst the attachment bond during infancy is important, it is not realistic to view it as 'crucial' for later outcomes. Clarke and Clarke (2000:103), state that: one must take account of the ever greater number of factors known to be relevant over and above early experience itself. Subsequent influences can modulate the earlier effects; we know that early experience does not have a dominant role on its own and that reversal may be feasible. They summarise (2000:105) succinctly by stating that 'theories ascribing overwhelming, disproportionate and pre-deterministic importance to the early years are clearly erroneous'. Similarly, Bronfenbrenner (1977; 1983, cited in Clarke and Clarke, 2000) advocates looking at the wider context and inter-relationships within society in general. We must conclude then that it is not just the early years, but lifelong experiences and interactions of these experiences, including major life transitions and how these are dealt with that contribute towards the development of the whole person. Again we must reflect on Runyan's (1978, cited in Sugarman, 1986:2) statement on the importance of the whole life span, along with giving due consideration to both individual and environmental factors which influence, predict and determine the outcome of the person, be that during infancy, adolescence, adulthood or old age. ...read more.