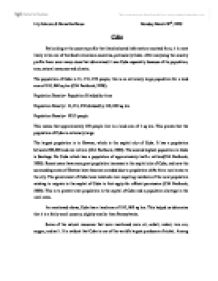 Pension programs are made by employers with the government making up the deficit. The contributions fund maternity, sickness and work-injury programs (Social Development). The national health care system as well covers all citizens whereas, in Bangladesh the system of pensions exist for public employees only. In Cuba women receive equal access to education and are found in most professions. In Bangladesh however, women receive unequal treatment in education, employment and divorce (Social Development). Predicting the Future of Cuba As a result of Cuba's particular demographic trends, Cuba's median age has risen from 23.4 years in 1960 to 32.9 in 2000. It is projected to increase to 43.1 by 2020 (Appendix 3 Fig 1.2), rising even further by 2050 which is the end of the projection period (The future of Cuba, 2003). This rapid aging will have serious effects on the Cuban work force. In 2002, when the country had 1.6 million elderly, the PSR (Potential Support Ratio) in Cuba was 7. By 2050, as the number of elderly is projected to reach 3.7 million (Appendix 3 Fig 1.2), with a relatively unchanged overall population size, the PSR is expected to decline to 2 potential workers per retiree (The future of Cuba, 2003). ...read more.