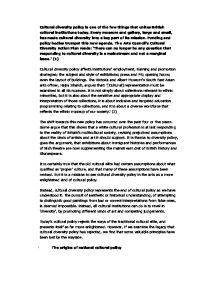 Cultural diversity policy is one of the few things that unites British cultural institutions today. Every museum and gallery, large and small, has made cultural diversity into a key part of its mission. Funding and policy bodies trumpet this new agenda. The Arts Council's Cultural Diversity Action Plan reads: 'There can no longer be any question that responding to cultural diversity is a mainstream and not a marginal issue.' (1) Cultural diversity policy affects institutions' employment, training and promotion strategies; the subject and style of exhibitions; press and PR; opening hours; even the layout of buildings. The Victoria and Albert Museum's South East Asian arts officer, Hajra Shaikh, argues that: '[Cultural] representation must be examined in all its nuances. It is not simply about collections relevant to ethnic minorities, but it is also about the sensitive and appropriate display and interpretation of those collections, it is about inclusive and targeted education programming relating to collections, and it is about a diverse workforce that reflects the ethnic makeup of our society.' (2) The shift towards this new policy has occurred over the past four or five years. Some argue that this shows that a white cultural profession is at last responding to the reality of Britain's multicultural society, revising prejudiced assumptions about the kinds of artists and art it should support. It is thanks to diversity policy, goes the argument, that exhibitions about immigrant histories and performances of Sikh theatre are now supplementing the mainstream diet of British history and Shakespeare. It is certainly true that the old cultural elite had certain assumptions about what qualified as 'proper' culture, and that many of these assumptions have been revised. But it is a mistake to see cultural diversity policy in the arts as a more enlightened kind of cultural policy. Instead, cultural diversity policy represents the end of cultural policy as we have understood it. ...read more.

If you value a painting only because it can tackle unemployment or improve self-esteem, then you have no idea what it is really worth. It's all about context, about the way in which you are using the painting, rather than the painting itself. 'Cultural diversity' policy blossomed as an expression of this situation. Uncertain about how to evaluate artefacts, cultural institutions celebrate difference as an end in itself. 'Diversity' here is really a metaphor for cultural disorientation. Of course, there are plenty of individuals working in museums and galleries who have kept their heads. They continue the struggle to learn from and enjoy art and artefacts. But when the public world doesn't hold to the idea of cultural value, their judgements are merely personal opinions. They can't claim that their view is any better than anybody else's, or try to convince others of its veracity, so they often keep it to themselves. In their public pronouncements, heads of cultural institutions tend to celebrate diversity. This is much broader than ethnic diversity - it is about celebrating different pictures, different views, different interpretations, different everything. For example, former head of the National Gallery Neil MacGregor has described the mission of public art galleries as: 'to try to allow our public access to different truths about our pictures - about their pictures - to allow the artists to speak in as many different ways and reach as many different audiences as possible, and to explore the richness of potential meanings implicit in great works of art - meanings both historical and contemporary.' (15) Nobody would claim that a painting had only one eternal meaning, but why actively try to find as many meanings as possible? Surely aesthetic education is about sharpening your eye rather than revelling in all the different ways of seeing. You will see paintings in different ways on different gallery visits, and others will see them in still more different ways, but this is hardly the object of the whole affair. ...read more.

All that talk about sweetness and light was just sugar for the pill. Given that cultural values are merely cover for individual identity, goes the argument, how much better to allow as many different people to express their preferences as possible. Why should Turner be given so much room to represent his sea voyages in the National Gallery - why not allow more people to portray their travelling experiences? In fact, today's diversity officers are foisting their cultural assumptions upon the past. The past is judged by the limited horizons of the present, and the present gets to pat itself on the back. The traditional British elite's cultural policy was, to some degree at least, true to its rhetoric. Although cultural institutions were set up for ideological reasons, they were much more than ideology. Museums and galleries really were a separate sphere, where art and history could be studied for their own sake. These institutions' aesthetic and intellectual judgements cannot be reduced to cultural, political or personal identity. After all, we must remember that it was culture's lofty aspirations that attracted the nineteenth-century bourgeoisie in the first place. Those lofty aspirations should be defended. Today's cultural policy actually has much in common with the nineteenth century brand of bourgeois philistinism that the 'men of culture' were rebelling against. According to the philistines, the only standard of cultural value was the amount of pleasure it gave to the individual. On this basis, English philosopher Jeremy Bentham decided that: 'Prejudice apart, the game of push-pin is of equal value with the arts and sciences of music and poetry.' (25) Another trademark of the philistines was the celebration of everyone having their own opinion. Matthew Arnold satirised this 'doing as one likes', as he called it: 'the aspirations of culture', he said, 'are not satisfied, unless what men say, when they may say what they like, is worth saying...' (26). In Bentham's pleasure principle, we can see something of cultural diversity policy's emphasis on making visitors feel 'valued'; in 'doing as one likes', we can see the celebration of diversity. ...read more.