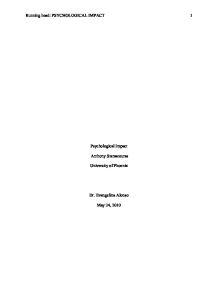 Day-to-day, there are a number of issues that could impact a person's development, cause distress, and guide behaviors. An attempt is made looking at how health care, immigration, and prejudice issues have an impact on an individual's social and political

Psychological Impact Anthony Stamatouras University of Phoenix Dr. Evangelina Alonso May 24, 2010 Psychological Impact With socio-political factors relating to or involving a combination of social and political issues, the potential is there to impact the psychological development, distress, and behavior on a culturally diverse individual. To understand what these impacts are, one would first have to have a clear definition of social, political, culture, and the unbiased views of the issues. Social is the interaction between individuals and groups within the same society: forming cooperative and interdependent relationships with others of similar make-up. Political refers to the government and the interaction and relationship one has with the system. Culture, on the other hand, is the shared beliefs and backgrounds of a collection of people. Day-to-day, there are a number of issues that could impact a person's development, cause distress, and guide behaviors. An attempt is made looking at how health care, immigration, and prejudice issues have an impact on an individual's social and political views developmentally and behaviorally. Healthcare Human development is defined as "change during the life course in enduring patterns of behavior or perception resulting from the interplay of biological characteristics of the person and the environment" (Bronfenbrenner, p 35, 1983). Cognition is the processing of the brain. Cognitive components of human development first start at birth: the framework of what we are to become. These are the attributes that we get from our parents in our DNA. As we grow, we go through developmental stages in life; how fast and productive is dependent on cognitive ability. ...read more.

It is their evaluation of the family and group in determining their lifestyle; the more friends, more affiliations then the more they are liked and respected. Latino's view on religion is that whatever happens is suppose to happen, fate. Occurrences of events are related to luck, God's will, and the bad wishes of enemies (Frevert, 1998). The more important aspect of time for Latinos is the present: contrast to Caucasian American's importance on the future. Latinos frequently focus on the present, since fate will determine future events and fate is beyond control (Frevert, 1998). Family plays a huge impact on the individual's social and emotion. Latinos give so much importance to the family that marriage, in the traditional Latin culture, is the union of two families and not only of two individuals (Frevert, 1998). Males in the Latin culture will seek advice and assistance only from other male family and friend members. Psychological cautions when working with the Latin culture. Be careful and aware of translation with language since some concepts don't cross language lines. There are American concepts the Latin culture do not have words for. Mental illness and disabilities are viewed differently in the Latin culture. The DSM-IV suggests that "the particular symptoms, course, and social response are very often influenced by local cultural factors" (p.844 ). Situational complaints of Latinos who migrated include depression, anxiety, feared loss of control, even helplessness, fatigue, and eating problems. With a strong belief in fate many Latinos believe that mental illness and diseases are meant to happen. ...read more.