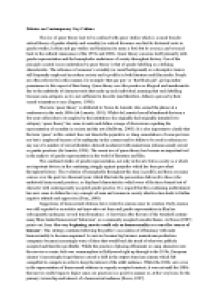 ﻿Debates on Contemporary Gay Culture The rise of queer theory (not to be confused with queer studies which is a much broader critical theory of gender identity and sexuality) as critical discourse can find its historical roots in gender studies, lesbian and gay studies and feminism (to name a few) but its essence can be traced back to the cultural renaissance of the 1950s and 1960s. Queer theory concerns itself primarily with gender representation and the homophobic undertones of society throughout history. One of the principle societal issues undertaken by queer theory is that of gender labelling as a defining characteristic. The reference of someone?s sexuality (or racial background) as a descriptive term is still frequently employed in modern society and is prolific in both literature and film media. People are often referred to in this manner, for example ?that gay guy? or ?that black girl?, giving undue prominence to this aspect of their being. Queer theory sees this practice as illogical and anachronistic due to the multitude of character traits that make up each individual, meaning that such labelling becomes non-categoric as it is not sufficient to describe (and therefore, define) a person by their sexual orientation or race (Jagose, 1996). ...read more.

As Russo asserts: In a hundred years of movies, homosexuality has only rarely been depicted on the screen. When it did appear, it was there as something to laugh at?or something to pity?or even something to fear. These were fleeting images, but they were unforgettable, and they left a lasting legacy. Hollywood, that great maker of myths, taught straight people what to think about gay people? and gay people what to think about themselves (Russo, 1987. p 258) Russo?s analysis is accurate and his sentiment poignant. The strict guidelines of output which began to break down in the 1960s and 1970s came in tandem with the rise of both the women?s and gay rights movements, during which time homosexual portrayals in film became increasingly negative. As previously highlighted, there are many strands of discourse which have now come to be associated with Queer theory. There is a fundamental dichotomy which exists within Queer theory, largely due to its grounding in gender studies, between the essentialist and constructivist viewpoints. The essentialist argues that sexual orientation is intrinsic to the being of the individual and thereby inherent or essential to their universal make up whilst the constructivist would posit that any sexual preference within the subject would be a construct of their given set of extraneous experiences and circumstances (Sullivan, 2003). ...read more.